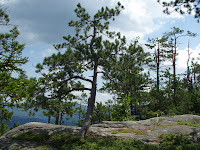 I had noticed this chain of ledge sided peaks last year and finally made the trip. It would be Tiny Tornado/Tracey, Ascender/Scott and myself (Excape/Jason). I made my way from NH 16 and onto the "Kanc", took a right onto Bear Notch Rd. which was clogged with byciclists (I take this way to avoid the Conways). We took a right onto NH 302 and then a left just after the covered bridge onto Covered Bridge Lane. Once on this Rd. take your first left and follow the Rd. as it curves right, the trailhead will be on your left.

Upon arrival at 10:30pm there was only 1 other vehicle. We geared up, signed the register and headed on our way. The trail begins gradually as it passes some homes then works it's way up a small ridge. The trail then becomes pretty steep as it climbs up to the first of many ledges. We stopped on the first for a break, the air being very humid today. A group of teens passed by with camping gear and we continued on stopping at the various ledges overlooking the Saco River and Attitash Ski Area, the sound of the highway heard most of the day. Passed a couple small patches of mud and soon we entered a beautiful habitat of red pine. We reached the rocky, wooded summit with obstructed views to Mt. Pickering and Iron Mt. The scraggly, weathered Red Pines here look like a Japanese Garden of Bonsai's.

Continuing on we passed a nice ledge looking North and dropped down to a col and a steep climb up to Mt. Pickering. The summit was wooded which we passed by and stopped at the ledge on it's North Western side arriving at 1:30pm. This spot affords a simple view of the "Crppies", Mt. Langdon & it's South Eastern facing ledge, Iron Mt. and Washington and the Southern Presi's poking out behind and to the left of Iron Mt. We ate our lunch in-between batting at blackflies. A couple arrived at the ledge also exuasted from the steep climb and humid, sunny conditions. We chatted briefly and we headed back the way we came, not interested on going further in the tourcherous heat.

We made one more stop at the Stanton Ledges and then back down. Once at the parking lot another group of hikers were gearing up with camping gear headed for Langdon Shelter. We arrived back at 3:30pm. Honestly I was not all that intrigued with the hike. A hike to Stanton's peak is well worth the effort to see the Red Pine and the view to Iron Mt. I would like to try this hike in the winter, as views to Attitash would probably be pretty interesting. It does seem to be a less traveled trail, though campers seem to make use of it.