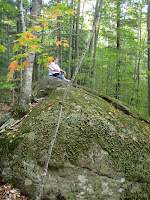 What a spectacular day! After bringing Scott's mom (Paula) up Blue Job the other week we decided to bring her on a longer hike. She was up for another fun day with us! I set my sights for the always exciting and beautiful Welch and Dickey mountains at the entrance to Waterville Valley. We arrived at the parking lot early at 8:15am as to avoid the inevitable crowds. To my shock and dismay a bus full of kids was just beginning to unload. What are the odds I whined! We got our gear together and took off up the trail at 8:30 hoping to stay ahead of them, and that we did the entire day! The trail was gradual and we stopped a few moments to rehydrate and to check out a rock, or a tree formation, etc. Things got more difficult as we began negotiating wet rock slabs and steeper pitches. 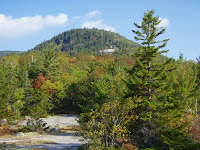 We arrived at the Welch ledge just after 9:00am. The scree wall and circles of tree limbs protecting the outcrop communities looking larger and uglier than the last time I was here. Some growth looks better while other areas haven't really improved. We took a break and many pictures. We could see a pair of hikers with dogs on the ledge on the cone of Welch. Sandwich Dome is the prominent mountain in view, it's pointed Jennings Peak easily identified. And the easy to notice Tripyramids to the North. Then swinging around with an always wonderful view up to Welch and behind us to Dickey Ledge. So far, so good. Paula was doing good and we were having a good time. 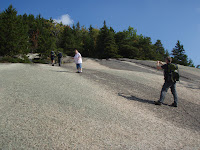 Back into the woods and we soon began a steep climb over granite slabs and ledge before breaking out onto the large open ledge were we saw the hikers. We could now look back to the first ledge and could see the school group hanging out at it. Paula began feeling the hike at this point, as we all did. We forgot just how steep and tiresome this little hike can be. Scott kept saying "almost there" every 10 minutes which became the joke of the day. More ledge and rock scrambling through countless granite ledge and broken rock and finally arriving at the last steep section. Here we ran into the two hikers with 3 dogs. One of which ran up to Scott and began to bark at him. "I was about ready to get ugly when the owner finally got up and pulled the dog back, stating she won't hurt anyone...the usual remark. Paula was being funny and joking with us that she couldn't believe we took her up this mountain on just her second hike. But for 64 she said she was doing good, and with two new knees! The ladies heard this and were impressed as they then cheered her on as we laughed. 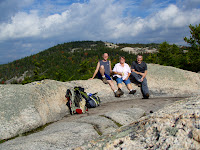 We made the final ascent and finally made it to the summit of Mt. Welch (2605') at 10:06am. Winds were whipping at a wonderful 30mph and the color of the changing trees was spectacular. We sat and had our lunch, taking in the view and the wonderful weather we were having. Paula had us laughing over the saying on the back of her "Honest Kids" sip drink, "Don't worry if your tasks are small and rewards are few, remember that the mighty oak was once a nut like you!" When we were ready we headed down the other side to the col where I found the first good mushrooms of the day! Then began the ascent of Dickey  mountain. More steep climbing with views across to the very pointed Welch summit cone. We quickly reached the highest point of Mt. Dickey (2734') at 11am. Views were great North up the ridge connecting to Tecumseh and the view to Franconia Notch visible and a bit cloudy. 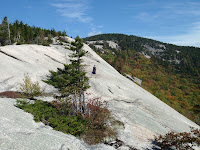 Once across the summit area we made our way across and down ledge and into the trees past a granite wall and more mushrooms scattered about. Then the highlight of the day, the breath taking Dickey ledge. We sat and had another long break here taking in the panoramic view of Dickey and Welch and the valleys and peaks to our East and South. I could have spent the rest of the day just sitting and looking, the cooling breeze and warm sunshine with clouds rolling by overhead. These are two little mountains that will never get boring to hike. They are truly a NH treasure! 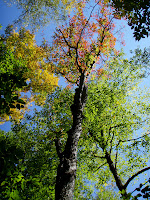 We continued the climb down, Paula really feeling the tough hike in her knees but she charged on, taking breaks here and there then right back at it. Acorns all over the ground were making the walk more painful and uncomfortable. We passed several people on there way up, all of whom were in good spirits and enjoying the lovely weather. We arrived at the trail junction, took a left and found a now full parking lot at 12:45pm. We drove off to Dunkin Donuts, an iced apple cider for me, a hot coffee for Scott and Paula a pumpkin iced coffee which was too heavy on the allspice!! I love fall hiking :) And Paula is a humorous person to have along with us. We all had a laid back, play-around kinda day! (pictures)