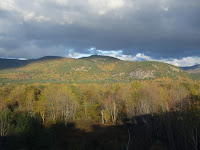 No, not WhatWouldJesusDo? ... that's so 1990's! More like WetWebster-JacksonDitched. The story begins on Friday night when I felt a cold coming on. Sure enough Saturday morning I awoke to a sore throat and not feeling too good. Saturdays work done I wondered what Sunday would hold. Still not feeling too well Sunday morning, we scrapped plans for checking out some spots in the Belknap range and hung around home. Well, not the "holiday" weekend I was planning on so far }:-( But nothing was stopping me from hiking Monday! We would decide in the morning what the objective would be. I awoke 5am, feeling a little better and ready for some hiking. Scott was unusually slow in getting going, but we got ready and headed out. I decided to head towards Crawfords Notch, hoping that traffic would not be a problem today. The roads were pretty clear and I was shocked to park at the nearly empty Highland Center parking areas. I had expected this usually packed area to be a little busier, OK by me! The plan was to do a loop over Webster and Jackson. Something that I have wanted to do for awhile but wanted to avoid the crowds that flock this area. So far so good, aside from the thick cloud cover that enveloped the area. "It will rise and clear out", I assured myself. 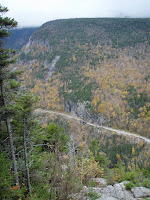 We began up the Webster-Jackson trail at 8:20am. A gradual hike ensued up a wet trail. Scott was falling behind me, which wasn't the "Ascender" Scott that I have seen throughout this past year. We arrived at the Bugle Cliff outlook where Scott anounced he wasn't feeling well. That made two of us! His stomach bothering him, my throat bothering me, and both of us sniffling and whining! We checked out the nice but clouded view noting the Elephant's head ledge that we by-passed on the way up and the Highland Center and Mt. Washington Hotel beyond. Winds were whipping good, but the sun was shining brightly to the far North and South, so I continued thinking positive that it would break for us by the time we reached the summit. 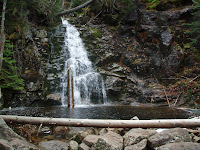 The trail now began some steep pitches broken up by nice level sections and rock steps and stairways.We slowly continued on to the Webster Branch loop section. This section drops steeply to the Silver Cascade. Scott ahead of me now suddenly slipped on a flat, semi-vertical rock. Catching himself at first than loseing his footing and dropping and rolling into the very thin brush nearly rolling over a 30 foot drop. Yikes! Well out of "helping" range all I could do was watch. Once the scary ordeal was over Scott composed himself and retrieved his water bottles in the brush. Now on top of Scott not feeling well, he was suffering from a sore wrist and ankle. He felt good enough to continue so we made our way to the bottom of the banking to the pretty cascade, then back up the steep wall on the other side. We began to talk about how a simple slip really can be deadly in the mountains and how lucky it was that he rolled into the brush instead of tumbling into it, as there is no way it would have stopped him. 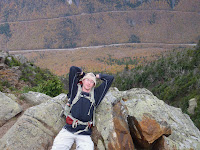 The trail leveled off and continued in steep and level pitches. Then remained steep over partly open ledge up to the summit. We arrived at Webster's rock spired summit (3910') at 11am. Conditions were not what I had hoped for. The cloud ceiling hovered just over 4000 feet. The sun had yet to break through. It was windy and cold. The awesome summit area would have to be enjoyed another time as we got cold very quickly. Once back into the tree cover we planned the next move. I really wanted Jackson so I could cross another 4K off the list, but conditions were not very good and it didn't look like they would improve. We did not plan on winter-like conditions and Scott being slightly injured we felt it best to skip Jackson and just head back the way we came. 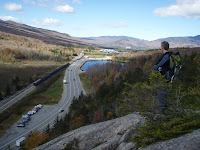 This turned out to be a smart move, as the wet trail now icing over in some spots was slow going. We passed several people coming up, also expecting better weather and we made our way back to the cascade. Scott having a particularly hard time with slipping and a branch grabbing hold of him. It seemed this mountain was out to get him! Back to Bugle Cliff for once last look, views began to open up (go figure), then back down to the Elephant's head spur trail. The day cut short, I decided to check this out since there was extra time. Scott stayed behind. .2 miles never sounds long, but sometimes it sure seems it. The ledge is a very nice and large. It puts you smack dab over the highway with a fabulous view up and down the notch. Just as I was wrapping up this quick side trip a train horn sounded. Wow, what timing! I had to wait for the train! Just then Scott popped up over the ledge. He decided, "what the hell", I'm here, mine-as-well check it out. We watched the train go by and stop at the Crawford Station, then made our way back down to the truck...finishing at 1:00pm (pictures)


Not a bad day, just not ideal. Still a nice hike with plenty of features to enjoy along the way. I will certainly be re-doing this peak on a clear day via the Webster Cliff tail. After this hike we of course had to make the short couple mile drive up to the Mt. Washington hotel to check the view. The high summits now in the clear and Washington and surrounding high summits looking very cold and frosty! The Whites are so beautiful!