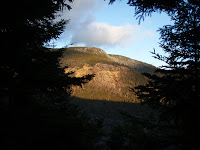 With a sketchy weather report for the mountains I was not sure this would be a good day for a hike. My brother really want to go so I figured it wouldn't hurt to give it a shot. The afternoon was supposed to see some improvement so I figured we'd get a late start to hopefuly cash in on some of that nice weather. We parked and got on the ski pants, winter jacket and other gear. I felt like an astronaut trying to walk around in all this clothing for the first time this year.

We headed out at 10:45am under cloudy sky's and a wind driven mist. Once the thermometer cooled off to outdoor temps. it read in the low 40's. The trail was leaf covered and easy footing. I decided to go the opposite direction as my spring loop hike and go counter clockwise up Mt. Mexico via. Big Rock Cave Trail, over Paugus than down the Cabin Trail. I wanted to ascend the ledges rather than descend them in case they were icy, and I remember the other side to be more gradual and a nice descent. After being startled by a tree top breaking and crashing down 50 ft. off the trail we encountered a burst of ice showers for a couple minutes than back to just winds. Jeremy had a pretty good wipe out almost rolling into a run-off stream, ha, ha, ha! Grades were gradual up and over Mexico and down to the Big Rock Caves. These caves are actually a HUGE chunk of rock split in three/four which created tunnels that you can walk through.

Once down to the river the sun began to peak out from the clouds...sweet! Once cross the river we crossed over Whittin Brook Trail and up Old Paugus Trail and the trail continues at gradual grades. Once you come to the base of the first ledges the trail becomes steep as you make your way through chunks of rock that have fallen from the ledges. The trail verges sharp right near the top and crosses in front of the bottom of a sheer cliff. Once past Bee Line Trail now on Lawrence Trail you again climb steeply to the base of another ledge and you climb around it's left side and come out to the top of it. It is here we had our lunch. Back on trail you now cross through a pine grove for a bit with peaks of Mt. Chocorua. Once past the pine grove the trail makes it's final steep ascent to the false summit (about 3000') which was covered in a thin sheet of patchy ice at 2:00pm. Here you want to walk down the rock passing some small boulders and through the trees to get to the ledge. Views here to Mt. Whiteface and Passaconnaway are breath taking. We battled the 50 mph winds briefly and headed back to the false summit.

Heading down the other side (still Lawrence Trail) was a breeze! I was happy to be going down the never ending switch backs this time instead of up them and we jogged down much of this section. Footing was a little more tricky on this side of the mountain with many slippery roots. I tripped on a root (while jogging) just as the trail suddenly climbed and I crashed to the ground and burst out laughing... I joked with my brother, "now we're even!" Once at the bottom of this you have some asceding to do as you skirt a ridge than climb to it's South Knoll. It is on these sections you get awesome views of the Paugus Ledges a reminiscent orange similar to Mt. Lowells Ledge/slide seen from Mt. Carrigain. The sun going down now we picked up pace coming to our Cabin Trail Junction. We arrived back to the truck at 4:30pm.