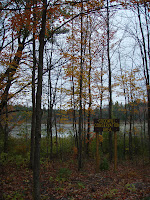 "A Barrington Find on a Yucky Day" (pictures)
OK, so it wasn't THAT yucky. Scott had to work Saturday and of course that turned out to be the nice day of the weekend. With rain showers forecasted for Sunday afternoon I figured we'd once again stay close to home and hike Mt. Major or something. Well, between rising late and having too much to do for the day we never made it anywhere. I had some work to do in Dover and Barrington so I decided to snap some pictures of the areas old buildings and cemetery's. It was after I left Barrington's Pine Grove Cemetery that I noticed a sign as I "wizzed" by, "Goodwill Conservation Area". And as you might guess I turned around! There is a small parking lot in the trees. This area was protected in December 2007 and is 156 acres! 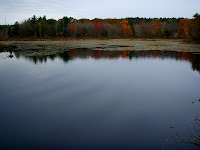 You are immediately greeted by a pond, Richardson Pond I believe is it's name. The trail begins by climbing over a gated bridge (why there is no pedestrian throughway I don't know!?) and you find a path to the right and a logging road to your left. I took a right as the path followed the pond. After a short ways the trail makes a tiny loop and you end back at the start. 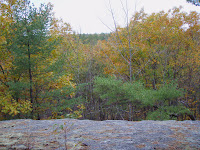 Now I headed up the logging road. It's starts off at a gentle ascent about 100 feet in elevation. I figured I'd run into someone as there was a vehicle parked in the lot. Sure enough I came across a lady walking her dog. I asked about the trails and she was very nice in giving some info. I continued on over another hill until I came to a sign that read "Ledges Trail", and some other ski mobile "mumbo jumbo". Apparently this is part of a ski mobile trail network in the winter. You now pass several ledges in the trees and as you make your way down the hill a large ledge on the left beckoned me. I climbed up to the top of it to find a trail. I followed it to a beaten path to another open ledge, then decided to go back to the main trail. I walked down to the end of the ledge to a fork in the road and a diamond sign. The lady had told me this was not a loop. I wasn't sure which way to go and since it was sprinkling I decided to head back before it got really wet as I wasn't dressed to be out in the woods! 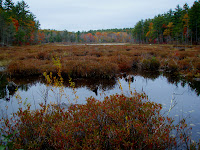 So back I headed, climbing to the top of another ledge finding another semi-open rock slab. Then back down the trail hoping the rain would hold off. I caught a glimpse of something red in the dirt road, and spun around to investigate. It was a red-walled tire that read "US Royal", which upon some research are tires that were used in the 1960's and years prior. Neat find, I thought! I made a stop at the marsh I passed earlier, bushwacking to it's shore for a clear picture. Back on the road I did a tick check and got back to the pond for more pictures before heading home. Distance was about a mile (1 hour round trip) with the pond loop and logging road. I will have to investigate further where the other roads go to on a better day. (pictures)
Posted by Jason at 1:13 AM