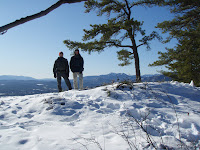 Saturday was forecasted to be cold but clear and it was just that when we got going in the morning. I decided on a small peak (small/lesser known peaks seem to be my calling card) which I have had on my "check me out list" for some time now...Peaked Mt. 1,739' in North Conway, NH (Green Hills Preserve - Nature Conservancy). We arrived at the Pudding Pond trail head in North Conway and headed out at 11:00am. There were several couples headed to the pond loop (on our way up & down) and many of them with happy-go-lucky dogs. The trail starts out on a gradual railroad grade up to the first junction where we took a left up Peaked Mt. Trail. Trails throughout the day were well packed and marked well.

Here the trail got a little steeper, then an onslaught of minor puds for the next 1/2 mile until we reached the Thompson Trail Kiosk. Took a right here and the trail climbed steeply up to the 3rd trail junction and up to the open ledges. The many sounds from Cranmore keeping us company. We could hear the chairlift, music from the lodge?, and could hear the skiers swishing, laughing & screaming as we watched them travel through the trees on the trails (and they were packed!). Views on this side of the mountain were great to Mt. Washington and it's southern neighbors. I pittied those on the Southern Presi's today as they looked pretty clouded in.

After climbing up many open ledge and beautiful pitch & Red Pine we arrived at the summit at 12:30pm. Views opened up to Black Cap, Middle & Rattlesnake, Chocorua, the Moats, Whitehorse & Cathedral Ledges, Carrigain and I think the Hancocks. There were no views of Washington and limited views of Cranmore & Kearsage North. I tarried along the ledges taking pics, slipping once on some hidden ice too-close-for-comfort near the cliff, scaring the crap out of Scott...dumb-da-dumb-dumb-dummmd! We made quick time down until we came to an icy stream and wouldn't ya know it I was tramping through the knee deep snow and trees to get pics!

We arrived back to the lot at 1:15pm as bicyclists were just coming off the bike trail. A great little hike with outstanding views for a modest effort! Total Trip Time: 2.25hrs. Total Mileage: about 3.1. Weather: Crystal Clear in the upper teens/low 20's, some wind.