"A Laid Back Day in Milton" 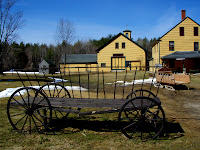 Upon driving up to Chocorua Saturday for a day hike we quickly were reminded how different things can be just an hour North. Snow was still deep in the forest and on the open peaks. So before even stepping a bare boot on a trail we bailed on a higher summit/Northern hike. Bummed out we headed back towards Farmington. I decided on the way we would check out Copple Crown Mt. We drove up the road and at it's end the access road was still plowed in with a giant snow bank. The home owner here was working outside on some vehicles and gave us sort of a dirty look. So I made a quick U-turn and headed back out to Rt. 16. Strike 2! 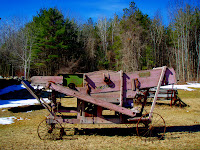 Back on 16 I decided to get back off and check out the NH Farm Museum which I heard had some trails. I stopped at a SPNHF sign for Jones Forest. There was no trail present so I continued on a couple hundred feet to the farm. This large beautiful farm was closed but we got out to look around the grounds anyway. After reading some interpretive signs we made our way to the back where there was indeed some trails. 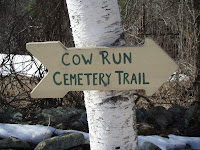 We began on the Cow Run Trail that follows in between two rock walls. We met some Turkeys and the went left onto Cemetery Trail which unfortunately ended with no cemetery in site. Back to the Cow Run Trail we followed it's course through the woods and back into a rock walled section where trees were blown over from what looked like a wind burst. The trail joins a logging road and returns to the farm. As we emerged from the woods we were met by a chipmunk watching us from a rock wall. Several trails are in this area marked with blue snow flake blazes and wood tree blazes. Sometimes easy to follow and sometimes not so easy.

"Mt. Teneriffe Preserve" (pictures)
(Directions) From Rt. 125 in Milton take Teneriffe Road. Continue under highway and half way up the hill a sign on your right marks the Preserve and parking. 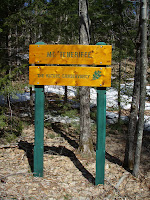 After leaving the farm we continued on down through Milton. I spotted a road sign reading Teneriffe Road and re-called hearing there was a trail or something on this small peak. I decided to check it out. Sure enough partly up the hill we spotted a well built sign for the Preserve held by the Nature Conservancy. The land is recognized as one of five most significant Small Whorled Pegonia sites in the world. It is also home of two rare forest communities and two other rare plant species Squaw Root and American Ginseng. 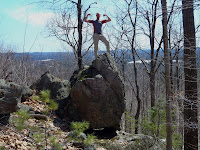 We began our hike at about 11am. There is a kiosk set in the woods with a log book and paper brochure/map. We continued, this being the ledge trail, and crossed by many small ledges. A small loop trail was on the right call the Spur Trail which we passed by. Then we came to a large rock with an open view to the North. Onward past a large tree as we made a short, steep decent. Soon we reached another large tree and a trail junction for Back Mountain Trail. We continued straight down Ledge trail which brought us past more ledge and then to another junction with Back Mountain Trail. 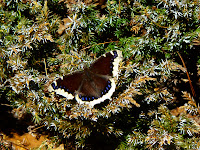 Again we continued straight, through a rock wall and to a rocky area with a cairn. Moarning Cloak butterfly's were all over the place here! Just past this area was a ledge to the right that offered a partial view. Back to the trail junction we now took Back Mountain Trail which followed a woods/logging road down hill through the forest. At one point I noticed a disturbed area of rock and upon investigating I discovered a stone well and small foundation. Perhaps a logging cabin site? 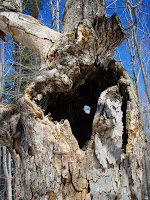 The trail continued to drop before making a left turn back up hill past a large rock wall. Past another large tree, this one dead and up into a sunny clearing. Then down the banking back to the trail junction with Ledge Trail. We followed the trail back out passing a small family near the entrance. We finished this attractive loop at about 12:45pm. We compared our muddy boots, changed and headed home for lunch. A nice, well marked trail which will certainly see many more visits from me!
Posted by Jason at 2:46 AM