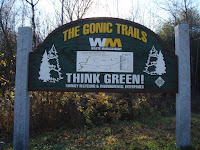 Such a beautiful day today I just had to get out and do something! It was already getting late in the afternoon and I had to go to Rochester to do some grocery shopping. The park over by Waste Management came to mind. A hiking area that I have passed thousands of times but had not bothered to stop at yet. I made the short trip to Spalding Turnpike, headed South on Rt. 125 into Gonic and after passing the blue Isinglass Mt. Hiking sign I took a left onto Rochester Neck Road. The parking lot was just over the hill on the right, you can't miss it! Parking was 1/2 full much to my surprise. I checked the map and headed off, deciding to take the blue blazed Locke's trail upper section. 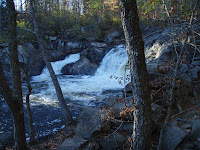 A gentle walk down a logging road through a pine forest. After connecting to the lower loop I kept to the right downhill to the river,  now blazed in Yellow. Here a sign was on a tree addressing Anglers. There was a granite bridge foundation and a rather pretty Isinglass River. I continued on the river trail (Luanne's Lane) to a banking with a large carved out ledge on the left. And to the right an old Mill foundation and some pretty falls. A man was fishing here and there were a few other people hangin' out. 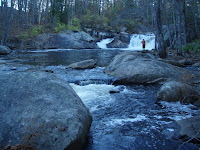 I continued on calling Scott who was just getting out of work at 2:30 telling him to meet me here. I planned on taking the Red blazed Watson's Way back to the parking lot. Passing by another fisher and the blazes changed to yellow and red. Then back to yellow. Confused I continued on for a ways before I began to wonder why I wasn't seeing any people and why I hadn't seen the red trail yet. I pulled my camera out and checked the picture of the trail map. It appeared I had missed the red trail. Back I went, jogging at times until I came back to the yellow/red blazes. I searched for the red trail but was unable to find it! 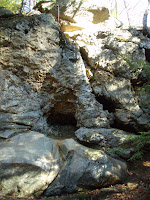 So, confused I went off jogging all the way back up the river and back down the Blue trail to meet Scott in the parking lot. I explained to Scott the very confusing trail web. Instead of giving each trail it's own color they double blazed where trails coincide, with each trails color. Sounds simple but it really confused me! Ah well. This time I took the red/blue blazed trail keeping right as it finally became all red. Then found where it meets the yellow river trail. Back again up the river then followed yellow back around to the parking lot.


Total mileage for me was like 4 miles. Nice easy trails if you don't mind a horrid waste smell every now and then. And somewhat confusing trail system. The Red and Blue trail loops have secondary names "forestry Tour" and "Local History" names with numbered sites but no interpretive signs explaining the site. So a little confused on what these site numbers are? I'll have to do some online research I guess. And the Gold trail says it's a 7 round trip but only shows 2 miles worth on the map. So I am guessing it continues on past where I had made it. Perhaps to Isinglass mountain or something. I dunno! More exploring I will have to do.