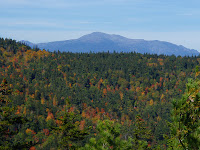 What a GORGEOUS day!! Not wanting to waste any second of the day we quickly decided Sunday morning where to head. When we got into Conway it was decided, a loop on the Moat mountains! We had been wanting to hike this for a long time now and today was the perfect day for it! We parked at the large parking lot for Diana's Baths. We quickly got our packs on and headed out at just before 8am. 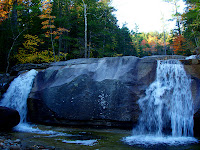 The trail is wide and level with compact sand. This trail must get a lot of travel as I had read in other trip reports. After a gentle walk we crossed a nice bridge and arrived at Diana's Baths. WOW! So pretty. I have seen pictures but they just don't do it justice! It was nice to be here early as I had read it gets packed with people during the day. Just one photographer and a couple sitting and relaxing, leaving me plenty of room to get some nice pics in! After climbing up the river to get some pics of the dual falls we got back on trail and continued our hike. 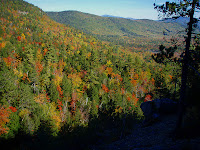 The trail now gets very, very wet. It stays this way for a while. Doing a TR 2 weeks after the trip I can't remember much more for trail details at this area. I just remember a fairly long walk through nice woods and colorful foliage above glowing from the morning sun hitting them. We took the Red Ridge Trail at the junction. After another long walk we crossed the river eventually and climbed steeply through a pine forest with red pines. Then the trail comes to a large rock and a land slide with open views to the North Moat ridge and a view to the North. Foliage was awesome right here! 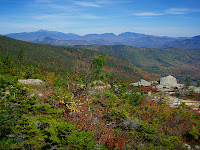 The trail now climbs over some semi-open ledge before coming to open ledge with great views across Conway to the surrounding mountains. It was a peaceful, beautiful spot! We sat here for a bit and enjoyed the wonderful day! The weather for October was just amazing! So warm and sunny! We continued the climb through ledge and soon had views of the Moat range. Snaking our way through the trail we soon broke tree line and climbed open ledge and rock, very similar to that of South Baldface just not as large scale. The wind was pretty strong here, but it was so nice and warm! 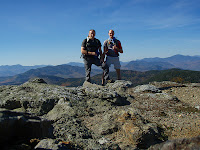 The trail re-enters the tree's so we found a nice ledge out of the wind to have lunch before continuing on. After lunch a short climb through the scrub and we were at the trail junction with Moat Mountain trail. There were 2 large rocks sitting here side-by-side which was pretty cool! The walk across the ridge to North Moat was all in the trees. It was narrow and overgrown in spots and riddled with blow downs. Looks like a nasty area for winter hiking! Halfway across the ridge or so, there is an opening that looks up to North Moat and a ledge that looks to the Sandwich Range and to the Northwest. Another beautiful spot! After a short steep section we soon came back out of the tree line and onto the rocky summit peak of North Moat at 12:15pm. There were half a dozen of hikers there battling the strong winds. We took another break here. 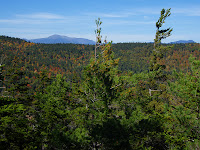 Then it was time to head down. We couldn't find the trail on the other side of the peak. I had to check my map to make sure it came off the summit. It did, so I did some exploring trying to find a trail. After scaling down the open rock I spotted a bright yellow blaze on the rock and the trail entering the tree's. I waved Scott over and we headed on down. We were noticing some fresh yellow blazes and soon came out to a semi-open ledge area. There was a lady sitting here and asked us how the blazes looked and if we had any trouble following the trail. She was trying to get some work done and trying to mark it better. I told her about the predicament we had coming off the summit. She said she would try and get some cairns built. We thanked her for her work and continued down, noticing new cairns and blazes along the way, as well as brush cut back from the trail. Nice job! 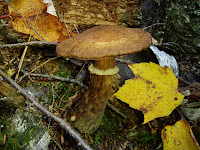 We arrived back at Diana's Baths to find it packed full of 70 or more people. Holy crap! We found ourselves amongst tourists all along this trail. It was rather a strange feeling! It was liking being on a lonely, quite country road then suddenly being on a city highway! We made our way through the crowds and finished our trip at 3pm.
Posted by Jason at 11:41 PM