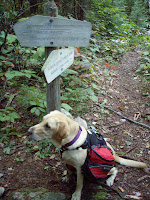 We arrived bright and early at Ferncroft parking lot just after 6am. A van was there and a car pulled in just before us. Scott's first FOT48 hike and my mom made a day-before decision to come along, her and I on our second year. We geared up and headed to Old Mast Rd. The two who had pulled up before us asked if we were with FOT48 for Passaconaway. I said yes rather surprised, as I wasn't aware of anyone signing up. They (Andy and Jess) said they had a day or two ago and that they had sent me (or someone?) an e-mail. I kinda started things off rude by telling them my mother hated dogs (as they had one with them). Probably not the best thing to say to strangers who would be joining us, but I just wanted to ensure my mother's and my enjoyment of the hike without a loud, out-of-control dog. The dog, Skyler turned out to be very well behaved however so it all worked out fine. Sorry for the rude introduction! 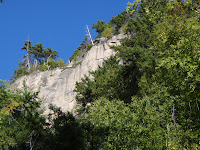 Off we went taking the Kelly trail. I knew this would be a bit more ambitious than some of the other, easier routes to the summit but I wanted to make a day of it and explore a new trail that I have been wanting to hike. Kelly trail was well maintained and we kept a very good pace, stopping shortly now and then for a quick swig of water. Jess had done two hikes up Katahdin this year and Andy from what I gathered  has not done a whole lot of hiking and was asking plenty of questions and seemed to be really enjoying the hike. The trail stayed rather gradual and got interesting at Paugus Pass where the trail climbs through a narrow gully similar to Ice Gulch, but lacking the boulder filled floor. Layers of rock shelves formed walls on either side of us. My mother got her hair bun caught in branches twice. And Scott and I forgetting we had poles rising over us, got caught a couple times on branches and a couple of head height blowdowns. So we a few good laughs! Then at another point my mom and I bent over to look at a moth on a birch tree bringing my flag poles in contact with her head. It was a pretty hard hit, but no blood thank God! We arrived at the Square Ledge Branch trail where we took a break. The SLB trail makes a steady climb up to Square Ledge trail where you climb steeply, with views ahead through the trees of Square Ledge. The trail brings you just below the ledge, then swings right of it and climbs beside it and through a stone trough of sorts. Once above and just past this a view spot on a steep ledge is on the right overlooking the large mass of Mt. Paugus. We took another break here. 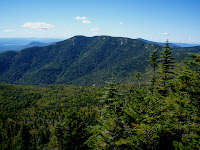 The trail now drops to a col then climbs steeply up to the Passaconaway Cutoff trail. Here we met 3 guys who started from the Kancamagus Highway carrying a flag that had hung over the US Embassy in Afghanistan. We chatted shortly then began climbing down dropping to another col. passing a view spot to Whiteface. Then we steeply climbed to the base of Passaconway's cone. A final steep push up Walden trail brought us to a level area. The trail swung around right and past a large flat rock with views towards Chocorua and North to Washington. There was a group of 5 with large camping packs on the rock, so we continued on as we wanted to get the flag up anyway and find the North View spot for lunch. 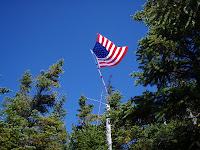 We passed the North view sign and soon found the summit sign to our left, right on time at 11:45am. We began assembly and I decided to scale a tree this year as I had done the year before on North Tripyramid. After several attempts to secure the pole to the tree, we finally had it set in place and secured. Unfortunately there was very little wind up here. But now and then a small wisp of wind would bring the flag at attention. Several people were there taking pics including the group we had met earlier who opened there flag for a picture, then headed back down before I even had a chance to see it and take a picture. We now made our way to the North view spur path which climbs down annoyingly, .3 miles and 200 feet to what turned out to be a small ledge where the group of campers had migrated to. We unpacked our lunch and huddled along the trail to eat, and once the group headed back up at about 1:00, we took possession of the space to take in the glorious view.

The view was spectacular. The entire White Mountain National Forest opened up in front of us! Cloud covered Mt. Washington in the middle, flanked on the left by the southern Presidentials, the Pemi Wilderness, Franconia Notch, the Hancocks, a spectacular view of Carrigain and it's notch, the Dry River Wilderness, the Osceola's and the Tripyramids. And to the right, ledgy Hedgehog Mtn. directly below, the Moats, Chocorua, Kearsarge North, Wildcat, Carter Dome and the Baldfaces. One of the best sweeping view spots I think I have seen! 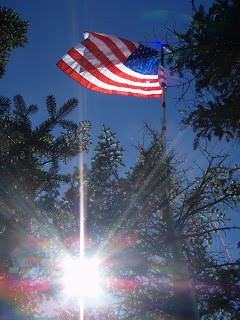 About 1:30pm we headed back up the trail and decided to drop our bags at the view spot to the West of the summit overlooking the Tripyramids. I took off to snap pics of the flag and over the the East view spot we had passed earlier. Then we began dis assembly of the flag. We began our decent at 2:00pm. The first section was very steep. Jess slipped on a rock catching herself from falling. Then I did the same thing on the same spot, twisting my ankle to the point of pain and burning. Very thankful that it didn't sprain or fracture! Must be all the hiking this year keeping my joints flexible. The burning feeling went away after about 10 minutes and no pain, phew! We were clearly a bit tired and this steep section was getting the best of us. On another steep section my mother made a wail and I turned back to see her crash to her knees and into the pine trees! This can't have a good outcome! But once again someone was watching out for us, my mother's knees landed on a bed of thick moss! She walked away from this wipe out with a small scrape on her arm from landing in the trees. Another catastrophe averted we got moving again. 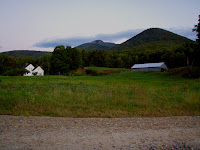 Jess and Andy took off down the trail at this point to meet us back down at the bottom. We slowly made our way to the switchbacks where the trail eased and stays at a gentle grade down Dicey's Mill trail to the Ferncroft road and parking lot. We passed a few people thanking us for our efforts and passed many making a late ascent. Onto Ferncroft road and past the picturesque homes, we arrived back at the parking lot at 4:30pm and very happy to get the boots off and throw a fresh shirt on! We said our farewells to Jess and Andy and headed out. A great day, perfect visibility, temperatures and trails. Couldn't have asked for a better day.
Thanks to all who participated in FOT48, God Bless America, may Freedom ring from mountain top to mountain top!