"Lost half our lunch on Willey!" Pics HERE


Directions: Take Rt. 16 through Glen, NH. At the three way intersection continue straight onto Rt. 302N. Follow for approximately 18 miles. Destination will be on your left. There is a pond, and cabins here marked as the Willey House Site. Hiker parking and trail are located at the South end of the buildings (signs) 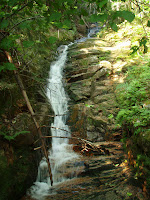 Report: We had originally planned to hit Adams on Saturday but we felt more like doing a shorter hike. Willey left us hanging (pun intended) this Spring with deep soft snow keeping us from getting beyond Kedron Flume. We began today's hike at the Willey House Site at 7:15am. The trail is very gradual as you pass some boulders and you switchback up to the train tracks. You make a steep climb up the banking on the other side and continue a gradual climb before making a slight drop down to Kedron Flume. The Flume is suffering from various blow downs, one of which was cut up this Spring, but otherwise if you climb up it a little bit you can get a good picture. The limited view to the South end of Webster's slide scarred ridge is also nice. 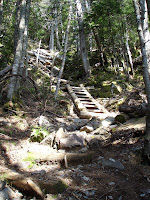 From here the trail makes an immediate steep climb through a blow down hell, but the heaven sent trail adopter had it all cut and moved aside. This trail section must require a ton of work each year! The steep climb continues until you reach the Ethan Pond trail where it levels off for a bit. In a short distance we kept right onto Willey Range trail. The trail turned steep again, over loose, gravelly sections then becoming very steep. You arrive at the largest collection of ladders I have yet to see in the White's. Not 2, not 4 but I believe there were about 9 ladders most of which were connected. It was awesome! 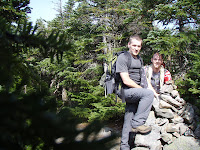 We got a partial view into the valley below with the river, road and train track snaking through the trees. We continued the very steep climb arriving at a knoll where the trail leveled and trees were smaller. Not the summit yet though! So we continued on becoming steep again before finally arriving into 7 foot high pines, a view point sign and just beyond, at 10:10am we reached the summit cairn at 4285 ft. (no view). We snapped a picture (number 27/48 4000'r for me) and went back to the view spot for lunch. 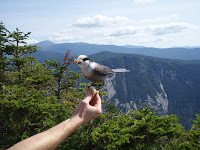 Views are spectacular with the Presidential range in full view and Mt. Webster "close enough to touch". Views were 180 degrees from just East of Washington all the way around to Carrigain. Some Gray Jays showed up which just made our day all the more wonderful. Out came the sandwiches and these two birds ate half of them! And I got my first Gray Jay pics...sweet! Just as we were packing up a solo hiker with a small dog named pepper showed up and chatted with us. He was doing a Field/Willey/Webster loop. 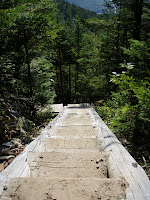 We parted and began the steep decent back the way we came. We passed a dozen people coming up, and we were glad to see we weren't the only ones astounded by how steep the trail was. And how awesome, but "calf killing" the ladders were. Many asked how much further there was to go. Not something I like being asked (and I never ask) and I usually say I don't know, but today, with such a steep trail I tried to comfort them with a reasonable estimate. One English couple in particular had us laughing. Husband to wife trying to catch up on a steep section (with English accent): Husband: "Come on you Bimbo!". Wife: "I'm coming, why did they have to put this retched rock in the way"!
We descended pretty quickly, especially once we were back on Kedron Flume trail where things leveled out. We were passed by the man and dog we met earlier headed to Webster. We arrived back at the lot, full of tourists. Time was 12:15pm.
Pics HERE
Posted by Jason at 11:41 AM