Pics of this hike HERE

With the weather forecast calling for hazy, hot and humid conditions with a chance of an afternoon T-Storm, I made the decision as I usually so to head to the Sandwich Range. I decided during the drive to head to Chocorua's Carter Ledge. This would be our 4th or 5th visit but this area never gets old! 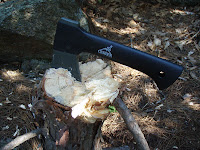 We started at 7:30am on the Piper trail, a very gradual and wide. I nice way to start out a hike! Mosquito's were very bothersome however. Mushroom Season is upon us and we were finding them everywhere! I kept and posted (on Flickr) 61 mushroom photo's in all! Already getting humid and sticky, we arrived at the Nickerson Ledge trail and began to climb steeply up to the Head of the Ledge, a side path (right) at the rock boulder erratic's. Onward now through some mossy woods, a small col. than back up the loose, gravelly portion below the Carter Ledges. Trails here are really washing out bad. I foresee some ladders being built here in the near future, or at least some extensive trail work or trail re-routing. Just above the first ledge outlook to Chocorua we came across a small pine blow-down. What I've been hoping for! I had just purchased a pack axe for just such an occasion! I chopped and chopped and the tree was moved off trail, victory!! 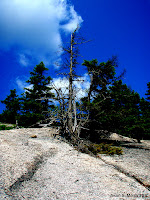 Once on the sprawling ledges we hiked up to the uppermost erratic which I call Carter Rock and we dropped our bags. We ate, relaxed and explored the dozens of ledge area's up here. This is truly a spectacular place. Views to Chocorua the best, quite and teaming with erratics, lichen and Jack pine. We hung out on the ledges for over an hour before heading back down. It was slow going on the loose trail but that was OK because we were in no rush and were still searching for mushrooms. 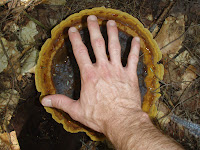 We passed all but 1 group of four below the ledges and three others on Piper trail. It was on Piper that I noticed the shroom jackpot so-to-speak. A large colorful mushroom about 15 ft. in the open woods.
We arrived back at the surprisingly empty parking lot at 1pm. The laugh of the day came when Scott, after finding that his M&M's candy had spilled ad melted in his cooler bag. Just South of Chocorua lake on Rt.16 at the top of the hill he went to dump them out the window when the whole cooler bag went out. It was pretty funny. We turned around and retrieved it without getting run over! Traffic was awful along 16! See all the pics HERE!
Posted by Jason at 12:10 PM