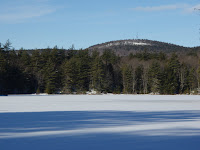 Difficulty: Easy - Moderate:
Fire Wardens trail on South and East side of the mountain is steep and wet with loose footing.
Loop trail which follows part of the access rd. is moderate but easy footing.
Gray Hill or Little Baldy Knob trail is easy with some easy rock scrambles.

Report: After a tuff night (as it's been all week) of vacuuming up never-ending sand at my cleaning accounts I finally fell asleep in my comfy bed around 5am ... thinking, "it's supposed to be clear on Wednesday, maybe if I get up early enough I will hike Blue Job." Well some pion in my body was listening 'cause I awoke at 8:30am and had trouble getting back to sleep (which is usually not a problem). So I said OK, fine, you win. I got up and made coffee and got my pack together with nothing in it but my E-kit, stabalizers, winter hat & gloves crackers and a water. Yes this is a tiny mountain but things can still happen.

I pulled into the lot after a 20 minute drive (snapping a shot of Blue Job across Whaleback Pond) and started out at 9:50am. It was clear that it was gonna be cold as the wind was blowing good in the parking lot and I had to take out my winter hat (wish I brought my balaclav...or however you spell it!). The trail was nicely packed down, and was the same at the Fire Tower loop section that Scott & I skipped last visit. It felt a little awkward, this being my first solo hike in a good 2-3 years, but I soon got over it as the trail somewhat steeply climbed, wasting no time going up. Limited views were off-and-on and more so at the first radio tower. Here the jeep road comes in which was packed down with snow mobile tracks, leaving some ice patches here-and-there. One final steep climb and around the corner the cell tower came into view and then the fire tower.

At 10:15am I climbed the narrow stairs to the windy/cold observation deck. Views were alright, most of the Northern peaks were clouded in. I did see a sliver of the ocean to the East and the factory smoke stacks puffing away in Newington. Spent about 5 minutes there then climbed back down. I noticed a trail which headed in the direction of the bald knob that we had been to on our first hike here. I followed it and soon found snow covered cairns, which were the only markings on this trail. I carefully jogged down this section as it dropped back down to the col. Here the packed trail ubruptly stopped at a 5 ft. snow drift. There was a faint snow shoe track that I was happy to step in, falling a few feet into the snow just twice. Once back onto solid ground and the open area the tracks split in all sorts of directions, hikers taking whichever way 'floated there boat' as there are no visible markers here. I followed the more direct route and soon spotted the large summit area rocks.

I arrived on the top of this knob (which someone on VFTT called "little baldy") at 10:30am. The wind was still pretty strong but more tolerable than it had been before. After taking some pics and a video on a low battery, I headed back down the loop, back to the loop junction and got to the lot at almost 11:00am. Total trip time 1hr. Views from the Fire tower not all that impressive, I prefer the Little Baldy knob. A nice 1 hour work out! Pics of this hike here> http://www.flickr.com/photos/excape1/sets/72157623153916894/
Posted by Jason at 2:30 PM