"Off Roading and Some Hiking" (pictures)
(Moose Mountains Facebook Group) 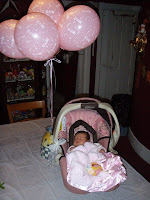 A busy weekend with hosting my sisters baby shower, work and an otherwise rainy/dreary weekend we never made it out to hike. Scott asked if I wanted to go for a small hike when he got home for work, and I never say no! He mentioned Blue Job but I hate the drive there with such short time, having to leave for work at 6:30 and getting dinner in before that. 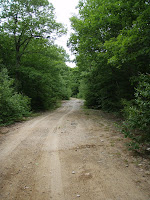 I had been wanting to check out another corner of the Moose Mountains Reservation over by Piper Mt. So off we went. I found the Access Road, a secondary dirt road and we followed it to a fork where I took a right onto Piper Mt. Drive (not signed). Now a class six road the going gets a little rough. Along this section of road signs were here-and-there warning that these areas were under surveillance. I slowly made my way over rocks and partly washed out road sections, but my Ford Escape was doing just fine. 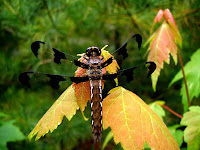 We passed another truck on a flat section and we asked them if they new where Piper Mt. was, they said we were headed the right way. Soon we came to another fork in the road, the right side being gated. Piper Mountain Drive continued but was not suitably maintained for regular SUV's. So we parked here and got our 'walk on'! FYI, the gated road I found out later on is a trail down to Lily Pond. Dragon fly's were prevalent again and one (6 Spotted Skipper I believe) allowed me a beautiful picture I am very pleased with! 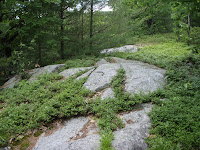 We climbed up the hill and after some time found another road intersection. Following my vague map of hiking and snow mobile trails I determined to make a left here onto Moose Mountain Road (not signed). From here we continued a climb up to a flat area where a trail leads off to the left just before the road steeply drops. We climbed this trail up to Piper Mt. Mostly over-grown ledges where seen here and we were not sure where the view ledge exactly was. Rather than follow the trail downhill we walked back to Moose Mt. Rd. Looking at a report and map now I believe the ledge was lower down on that trail and has a nice overlook across the pond. 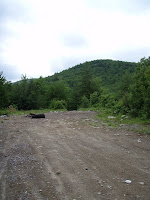 Back on the road I wanted to keep exploring, so we walked down the steep road and a view opened up to Phoebes Nable and Moose Mountains. Continuing on we arrived at another intersection where to the left the snow mobile trail runs down Piper Mt. trail to Bowser Pond and over to the rest of Moose Mountains Reservation. We noted a massive fire pit littered with old wheels, dozens of beer cans, lighters and other trash that will need to be cleaned up at some point...if at all. 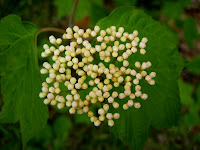 On our way back we where attacked by a ruffed grouse, the second in two weeks. These little birds are brave little creatures! After the scare and subsequent laugh we climbed back up the hill and back down to where I parked. For future reference I would recommend parking at the Moose Mountains parking lot on New Portsmouth Rd. and take the route up this road, take your first right onto North trail, the next right onto Piper Mt. trail which brings you by Bowser Pond and then at the road junction take a right and at the top of the hill another right onto the spur trail to Piper Mt. I will hike this route soon so I can get better info. for this trip.
Posted by Jason at 3:12 AM