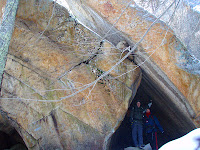 Not exactly sure what to hike and how much we could handle I decided on Mt Paugus. We always enjoy this hike and the Big Rock Cave is always a treat. Scott and I parked on the side of the road (plowed) for Cabin Trail. We got our start at 8:30am. We carried our snow shoes up the driveway to the start of the trail. The ground had some snow and a crusty layer on top. I decided to go with the snow shoes and Scott opted to bare boot it. It was one of those surfaces that were not really ideal for either. Temperatures were comfurtable with a cold breeze. The trail was well blazed and blowdowns had been removed/trimmed.

We made the junction and kept right at this fork onto Big Rock Cave Trail. All of the trails beyond this junction were unbroken, so we had to brake trail...if you want to call it that! The snow was so hard packed and crusty that we hardly made a dent in it. We made the approximate 1.5 mile hike over Mt. Mexico and down to the Big Rock Cave arriving at 10:00am. Always impressive to see this huge mass of house sized boulders! We explored the cave briefly before continuing on.

From here we crossed the river. Already getting a bit worn out we decided to skip Paugus and keep the hike shorter. So we went left up the Whitin Brook Trail. This proved to be much more of a challenge than I had expected. While it was not blazed, it was generally easy to follow of you pay attention. We trudged through the tiresome snow crust having to climb over and under many blow downs. We passed a Bobcat trail in the snow which was pretty exciting. The final long climb up a ridge to get to the Cabin Trail was almost more than we could take! It was steep and relentless with blow downs mocking our feeble progress.

It was such a relief to reach the Cabin Trail where we went left to head down. This trail also well blazed, with only a couple minor blow-downs. From here it was a long 2.2 mile hike out past the first junction and to the parking area. Which we did so in a hyper-speed, zomby-like state. It was a surprising I never tripped and fell all day as my snow shoes often caught the crusty snow and causing me to trip up. Scott seemed to fair well bare-booting all day. We both were very tired and sore when we finally arrived at the truck for 1:30pm. 5.6 miles in 5 hours. A reminder of how tough winter hiking can be! It was nice to get out in the woods though and we were proud of ourselves for what we accomplished!
Posted by Jason at 11:59 PM