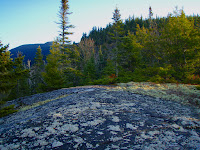 Today was to be a beautiful day in the White's by the afternoon, so off we went . I had no clue what I wanted to hike so I figured I'd pick something on the way up. Not spending much time this year near the Presi's Scott and I figured we'd stop at the Pinkham Notch VC to get our annual parking stickers and hike something in this area. This done we decided to head for Moriah, positive the clouds would clear by noon as they already had done so in Conway. We have only been to this summit once back in '07 via Moriah Brook Trail and remember enjoying it. This time we would tackle it from the other side!

We started out at the tiny turn-around at the Carter-Moriah Trailhead in Gorham. Start time was 9:15am, temps. in the low 40's. The trail makes a steep start up a banking then attacks Mt. Surprise gradually with excellent footing. I was happy to find a lot of slime mold, jelly fungus and Trametus Versicolor mushrooms along the way! We took a fast break about 10am and mouwed down our Reese's Fast Break bars as a solo hiker passed by. Once crossing some open rock areas (views of clouds) we arrived at the Mt. Surprise summit 2194' at 11:00am.

The trail now drops a little than climbs again. From here on out ledges, views, lichen and minor PUDS are constant with temps. up and down as well between upper 30's - low 40's (winds constant at about 10-15mph.) The trail was a stream all day with a side of mud, yuck! As if we haven't had enough of that this year! I barely got some pics of Washington and Madison before the clouds covered them again. A group of three guys passed us here and we "played tag" with them a couple times, before they finally passed us on there way down from the summit.

We arrived at Mt. Moriah summit at 1:15pm . The summit was a little cold and windy with no views...go figure. Back down was slow going especially on the Ledges. We had to "tarzan" down many sections using tree branches to swing from and the good ol' squat and slide technuiqe. We passed one more solo hiker on her way up with two dogs. One was nice enough to jump up and leave two muddy paw marks on my shirt. Of course once down off of the summit the skies broke, well atleast we had views on the ledges looking up to Middle Moriah, it's ridge and a setting sun behind the Presi's. We arrived back at the parking lot at 4:15pm. As we put our gear in the back of the truck we both smelled a fowl smell. I apparently stepped in some dog doo It was the nastiest smelling poo I have ever smelled I tried washing it off with water and on the grass with little success. We stopped at the gas station for gas and I got a plastic bag from the clerk to tie my smelly boot up in so we wouldn't have to smell it for two hours Dogs seem to always piss me off somehow on a hike. But life goes on. It was a great hike and it is always nice to get out and hike no matter the mileage, view or elevation!

Total trip time: 7 Hrs. Total Mileage: 9 Miles. An enjoyable trail and would probably be more so on a dry, clear day.