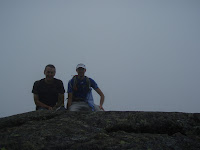 Sunday was to be an extremely humid day with a chance of showers and late afternoon was forecasted to have severe thunderstorms. So I didn't want to plan too big a hike and wanted to be sure we had ample tree cover in case of heavy rain and a quick-out if it did. The plan was to head towards the Sandwich Range. I had Algonquin trail in mind and we decided to give it a go. This is one of our favorite trails and was relatively near by. The Sandwich Notch road had seen extensive repairs since our last visit here. Must have been heavily washed out by Hurricane Irene. It had really needed some work and now has new culverts and nicely packed sand and gravel. There are still some steep tar sections not suitable for low clearance cars. 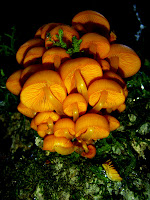 Along our way down the road we had a young Goss hawk land on a branch directly above the road only 20 feet up. It was neat to see him so up-close. We parked at the trail head deep in the woods and were once again greeted by a Goss hawk. The trail was pretty dried out as is the case for everywhere right now. Brooks, streams, rivers, marshes...all at a trickle or dried completely out with the severe lack of rain this summer. There were a few mosquito's but nothing major. We made good time up the first section with easy grades then began the first of many steep climbs. We stopped often trying to catch our breathes in the dense, soup-like air that was close to 100% humidity! Even the mushrooms were all dried up, only finding a few that were picture worthy. 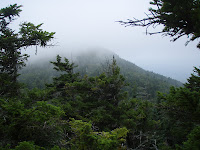 As we broke tree line into the first ledge views were nothing more than fog passing through the trees. It didn't look like it would clear for us at all today. We continued our climb reaching the spot we stop at on a ledge a little ways past the Black Mt. Pond trail junction. The wind was strong here blowing wet fog over our sweaty, clamy skin cooling us down really quick. By the time we finished our lunch we were actually cold! We took our time going down the steep, damp trail. At a section of trail that descends steeply along side a stream (currently dried up) I was taking a picture of a mushroom on a log and suddenly spotted a wood frog nestled in the bark of the stump. Apparently the only damp spot around! I poured a little of my water on him which it seemed to like.
Posted by Jason at 12:36 AM