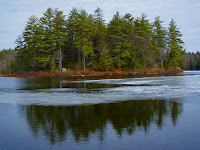 "The Out House Still Stands!" (pictures)

Directions: Heading North on Rt.28 in Alton, take a right onto Rines Road. The road will change to dirt, keep left at a fork. At the top of the hill is the road on the left. A small parking area is on the right for when the road is gated. 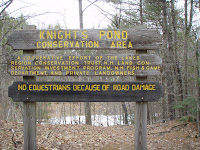 Report: The weather being "iffy" again for Saturday we decided to hit some small hikes and play out the day as it went. The plan was to head to Castle in the Clouds to view the water falls, then hit a couple other small forests/conservation areas. As we were coming close to Wolfeboro on Rt. 28 Scott mentioned checking out a place where he used to live with his sister. He said there was a farmhouse that had since burned and a big pond down a ways from the road. Now Scott hadn't been here for about 25 years and there was no telling what happened to the property. Probably a housing development or something! Well, we arrived at the now gated road with a sign reading "Knight's Pond Conservation Area". Scott was shocked, I was excited! Another pond and forest saved....YAY!! 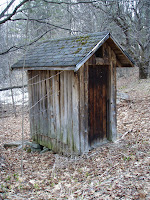 Cold and damp we threw long sleeve shirts and wind breakers on. As we walked the dirt road it was neat to be told what the property used to look like. "There was a big farmhouse and lawn here where this birch glade is", "a garden down the hill where that chain link fence is", "there was a cow pasture up there and a pig pin here where this wire is". And, "the out house is still standing! We used to have to walk across the lawn and road to go to the bathroom!" Too funny! I remember him telling me a story about running into a moose in the dead of night while making his way to the bathroom, LOL! We continued on down the road as it descended to a small summer time parking area and a kiosk. Then the road continued to descend until it reaches the shore of the pond. Before this there is a trail sign pointing to the left. 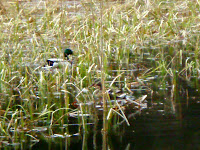 The trail enters the woods and then brings you along the South shore of Knight's Pond following it clockwise. A Wood Duck took flight at one point and I was disappointed that it flew to the far shore. But excited to see that they are at this pond! I'll be sure to return to try and get some pics of them! Beaver activity is seen all over. Trees chewed up all along the trail and water. The trail climbs up the banking then begins to follow the marsh at the West side of the pond. Then it crosses at a beaver dam. Such a beautiful spot! We continued on the trail following the North side of this long marsh. Scott spotted a male and female Mallard in the water and I was able to snap some photo's of them! 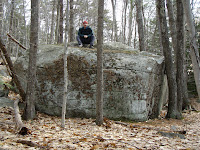 As we continued on, rocks and boulders became prevalent as we entered a wonderful boulder field. We stopped and took a break at the largest boulder. Here there is a trail that leaves on the right and loops around the peninsula that separates the pond and the marsh. This is an easy must do and adds about 500 feet to the trip. Winds were whipping across the water here and making it very cold. This cold, windy and damp weather has to stop! There is a good view from this trail across the marsh and down to the several beaver homes. Once the loop was made and back on the main trail we continued along the East shore noting some side trails. One that cuts back across the boulder field that we must have missed somewhere. And another that went North. 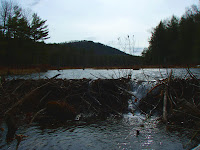 Continuing along we passed some more boulders until reaching the road again at a small beach, where Scott said they would swim at. Ending the trip was a mile long road hike uphill! All told, about 4 miles. We couldn't stop talking about what a beautiful area this was and how happy we were that it was saved and conserved for wildlife! It's by far the largest undeveloped pond I have been at and love the natural state it is in. Quite, full of wildlife and just plane beautiful! A large pond, marsh and boulder field. What more can you ask for!! A plaque at the end of the road at the shore lists the Organizations and people responsible for making Knight's Pond a conservation area in 1990. Thank you to all!!
Posted by Jason at 12:04 AM