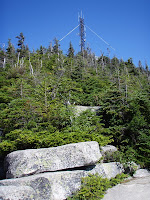 With beautiful weather on tap for the weekend we had our eyes set on a 4000 footer! We planned on doing a peak to get Scott caught up to me. Thus the options were Garfield, Tecumseh, Cannon and Eisenhower. Tecumseh is an easy hike I'd like to save for winter so that one was out. Eisenhower I feared would be very busy as it generally is in the summer. Not to mention the trails to the summit aren't the most exciting. Next on the list, Cannon. Again a very busy mountain particularly with the gondola. But, one that I hadn't been to in over 10 years and it had several trail options. Garfield is one I have been really wanting to hike too. I haven't been on this mountain in close to 15 years! We planned on getting up really early so I waited to see how early we managed to head out, how we felt and how the weather was in the morning to determine the mountain. 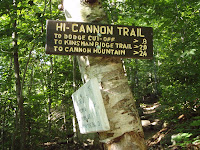 We awoke early as planned and headed out the door feeling ready and excited for a great day of hiking! Cannon was our pick for the day. Perhaps with the early start time and with the races going on in Loudon perhaps it would be on the quite side. We arrived at the trail head and got front row parking at the hiker parking lot! Awesome! I mentioned to Scott this lot will be overflowing out to the road when we get back! We got our boots on trail at 7:30am. The trail cuts through the campground, people were just getting up and getting there breakfast going and what-not. Once past this the trail climbs a wide gravel path up to the junction for Lonesome Lake trail. We took a right here on Hi-Cannon Trail. 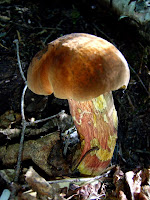 The trail now climbs moderately up eroded switchbacks, passing various boulders. Many large/mature birch trees grace this hillside. Scott spotted a large toad in the sandy trail and Northern Wood Sorrel was blooming here-and-there. We stopped at a fallen down tree that had it's entire root system pulled halfway out of the ground looking like bars in a prison. Mushrooms were plentiful and the day was starting off very pleasant! 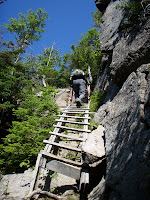 Past the Dodge Cutoff the trail climbs more steeply and the trail seems to become less eroded. It would appear hikers stick to the trails to Lonesome Lake and probably ascend Cannon via Lonesome Lake trail. After a couple large switchbacks you then must climb a rather rickety ladder along-side a steep ledge face. We've been on plenty of ladders in the Whites, many steeper and higher than this one, but something about it leaning to one side and the steps looking a little worn made this climb a little creepy! 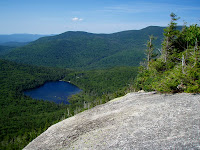 Continuing on the trail follows the crown of the ridge with views across the notch to the Lafayette Range. Then you arrive at the first of several fine ledges. We sat down on this ledge and took a nice long break enjoying this fine day and beautiful view. From the left you could see the Eagle Cliffs, the impressive Lafayette/Lincoln peaks and down to Mt. Flume. The view continues across the notch and around to Lonesome Lake. After some time we were joined by a young couple and we packed up and got back to the trail. The pine trees along this section had grown in and were brushing up and poking at us as we passed through. We checked out two other ledges along the way, with the added view to the Kinsman Mountains. 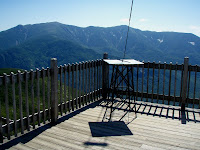 The trail moderates some as you pass through and over several ledges and rock formations.We soon arrived on the Kinsman Ridge trail and made the easy climb to the observation tower on Cannon's summit. Number 25 for Scott, still 28 for me! The summit was still surprisingly quite, but it was only 10:30am! Perfect time to be up here! We took our break and took in the view. Not all that better of a view than from the ledges, but a 360 degree view none-the-less. We then headed down and explored the rim trail a bit. We discussed hiking down to the profile clearing but it was much further than we wanted to go and snooty city folk were beginning to clog the summit trails. So we decided to head back down. 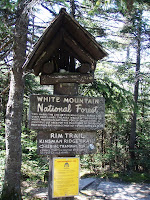 On the way down from the summit we passed a couple dressed for a walk in the park, the man carrying a small business type bag slung over his shoulder. They were having a hard time negotiating the rocks and I wondered were the hell they thought they were going. Were they trying to hike down to the pond?? Some people just don't realize that 2 miles on a street is not the same as in the mountains. There's elevation, rocks, loose footing, etc. Ah, well! Perhaps they would figure that out before they got themselves into a mess! 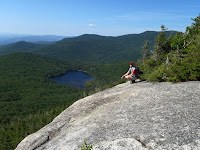 We climbed down quickly to the ledges and took another break here. Then we hustled down and carefully descended the ladder and the loose, eroded switchbacks. We arrived back at the campground, snickering at the campers sitting in there cars at the campsite and one lady who had her lawn chair plopped down in the parking lot reading a book. Ummm, OK! Looks like fun, LOL! The parking lot was as I figured it would be, full and overflowing to the street side. We finished our hike at 12:45pm. A great hike with lovely views and ledges. The first mile is eroded and not the best footing. But get past this and the trail turns into a pleasant hike. This trail really needs some attention; erosion, overgrowth, faded blazes, and worn/faded/broken signage plague this trail.
Posted by Jason at 1:11 AM