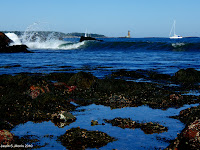 Having to work late Thursday and Friday night and with a long day of work scheduled for Sunday, I wanted to stay close to home this weekend. Scott and I headed for Portsmouth, walked the mall and had a always delicious burrito at Chipotle's. Then I thought we would drive over to the park in Rye and eat and walk the area. I had not been here since I lived in Rye 2001-2003 and Scott had never been. We walked the beach checking out the tide pools, rocks and views to Whaleback Light. I was excited to find a crab under a rock and further down the beach a small lobster! We got to the jedi and decided to head back to the truck. I remembered a trail nearby that went into the woods and past a bunker fortification. My memory served me well, the path now overgrown we found the main trail and bunker. Onward back to the beach then down another somewhat overgrown trail to the front of the park and back to the truck. A wonderful area, great for kids...no pets allowed :) The park does need work. Overgrown paths, fallen trees and branches and trash along the beach are numerous. I was rather shocked to see the park (at least this side) in such disrepair! A nice area non-the-less. Views are great to Fort Stark, Whaleback Light, Wentworth by the Sea Hotel and the 100's of sailboats, fisher boats and even freight ships off in the distance.