"A Peach of a Thanksgiving: Part 1, A Civil Hike" (pictures) 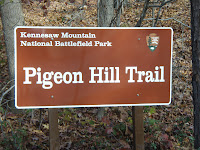 Part 1 of my vacation to visit my parents for Thanksgiving in Marietta, Georgia. Scott and I made a long 22 hour drive from NH to arrive in Georgia for Wednesday night. With the nice weather outside and wanting to have Thanksgiving dinner at the Marietta Diner later in the day, it was decided to hike the Kennesaw mountains. These mountains are the location of the 1864 Atlanta Campaign of the American Civil War. The battles on the hills ended in a tactical defeat for the Union forces and left 5,350 dead. We were very excited to do some Georgian hiking and learn some history at the same time! So off we all went (Me, Scott, Mom and Dad). The parking lot was very busy but we found a parking spot with no problem. We began our trip on Pigeon Hill at 12:30pm. 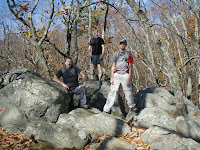 The trail starts off at easy grades passing a network of trenches where 154 Union soldiers died and 9 Confederate soldiers were killed in battle. Onward the trail became very rocky and pretty. Pine trees and Red pines dotted the landscape. At 12:45 we reached the summit of Pigeon Hill where large rocks point up from the ground surrounded by beautiful Oak trees. It was hard to believe that such a beautiful area was once the site of war and death! We snapped some pictures together here and continued on to the next climb. 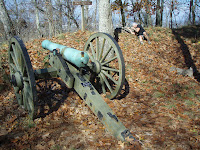 The trail now descends slightly and then climbs Little Kennesaw by a long rocky switchback. Red pines abound here among the rocky, ledgy terrain. On the second switchback a view opens up towards the skyline of Atlanta City. Onward past a wood fence and more rock ledge you arrive at the summit of Little Kennesaw (1600') and Fort McBride. Here 9 cannons were pulled to this site, 100 men to each gun after a trail was cleared in less than an hour! On June 27, 1864 these Confederate batteries helped repulse a major Union assault during the Battle of Kennesaw Mountain. After some pictures of the cannons we took a small snack break. The weather was perfect! Sunny and some where's in the upper 60's. 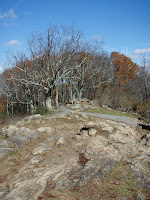 Past this area the trail makes a gradual descent over more interesting rock then climbs up to the auto road. Then climbs up past very old fencing and more cannons and trenches. We reached the top of Kennesaw Mountain (1808') at 2:00pm. Here a week long cannon battle ensued between opposing forces, though the majority of battle took place on the other peaks. Down the other side of the mountain is an observation platform and a parking lot. A plaque graces the stone platform as a tribute to the 14 Georgians who were Generals of the Confederate States Army in the Battle of Kennesaw Mountain. There is a view again to Atlanta City and Stone Mountain is visible beyond. 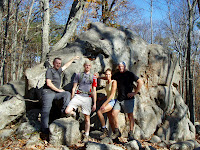 We took the road back down to the Little Kennesaw trail and back tracked the way we came. Stopping back at Pigeon Hill for pics. We finished at 3:00pm after checking out the immediate grassy area where Historic and interpretive signs are set up. There was so much more to explore, Cheatham Hill, Kolb's Farm and much more. But time didn't allow it, something to check out next visit! These mountains were a lot of fun. Rocky, moderate trails and plenty of history to ponder as you walk these once embattled grounds.
Posted by Jason at 3:05 AM