"The 3 J's" (pictures)
Difficulty: Easy - Moderate:
Fire Wardens trail on South and East side of the mountain is steep and wet with loose footing.
Loop trail which follows part of the access rd. is moderate but easy footing.
Gray Hill or Little Baldy Knob trail is easy with some easy rock scrambles. 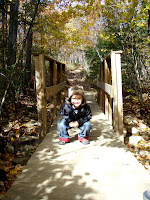 Report: My brother Jeremy decided to come over today, his day off, with his son Jonathan (JJ). He had said that He had been bringing JJ on some woods trails and that he really enjoyed it. So I told him we should give Blue Job a try. This would be JJ's first mountain hike! We got to the trailhead at 1pm, there were several cars parked. JJ was excited to get going! So off we went. We quickly made our way through the forest, JJ running most the way, taking a tumble every now and than! Pointing out the features, "look at that rock", "look a bridge, oh a waterfall", "come on you guys!" We then began the climb up the rock slabs of the knob which JJ was having a lot of fun with. 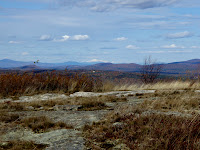 We reached "Little Baldy" knob at 1:20pm, there was a couple people up here. The view today was spectacular! The color of the trees in peak foliage, the clouds a puffy white, a warm sun and cool breeze, and Mt. Washington graced in his winter jacket of snow and ice! It really was the nicest view I've had up here yet! After spending a good amount of time here we then made our way down to the pond where we again hung out for a bit. Then it was the steeper hike up Blue Jobs cone. 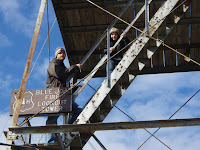