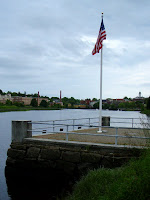 As I entered into Exeter I passed by Swasey Parkway. I've passed this small park often but never stopped to check it out. The view down the Squamscott river to the town of Exeter and it's mills, smoke stacks and steeples is very neat looking and I always wanted to take some pictures of it. 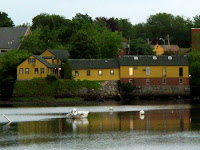 Today the clouds and lighting looked rather good for some photo's so I parked at the public parking lot and walked down to the park. Probably the most striking (and I believe one of the oldest) buildings along the waterfront is the yellow mill that sits below the dam. Such a beautiful building that elequintly sits in the center of the line of buildings. 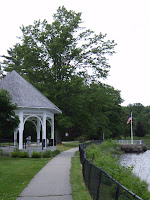 In 1930 Abrose Swasey donated this land and the funding to clean up a trash infested river side where a shipyard used to operate. Since then it has been a relaxing 1/4 mile walk with beautiful trees and shrubs, a pavillion, benches and a couple interpretive signs. 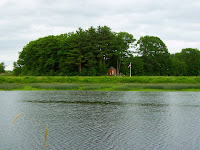 There is also a view across the river to the Old Powder House which used to store the towns gun powder during the American Revolution and the War of 1812. Powder captured from the British in New Castle was also stored here and used at the Battle of Bunker Hill. Incredible the history that surrounds us in NH, right under our noses sometimes without us even realizing it!
Posted by Jason at 11:32 PM