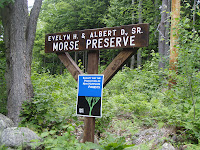 My sister Jill had asked if I wanted to hike Mt. Major with her kids. Looking at the week ahead to the hazy, hot and humid conditions I decided on Tuesday. As I got ready in the morning the weather was looking overcast and cool so I began thinking of possible smaller hikes where weather wouldn't be as much an issue. My sister was running a little late anyway so I figured at least with a smaller hike we could take our time and enjoy it. So I decided on Pine Mt. at the Morse Preserve. This is a Forest Society property in Alton Bay I had heard a lot about and had been itching to check out. We met at the bay and Jill followed me to the parking lot. 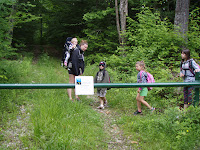 Once we were all ready, me, Jill, Adam, Sarah, Taylor (riding on Mom's back) and my sisters friends daughter headed out. We crossed the road and made the short walk to the gated woods road. Following yellow blazes we climbed a small hill and arrived at the kiosk. From here we continued up the road into a field where the trail is marked by marker tape hanging from branch tips. Ticks were bound to be an issue in the tall grass and we made sure to keep a close eye for them and removed a few here-and-there. There were a few mosquito's and horsefly's but they were not all that bad. 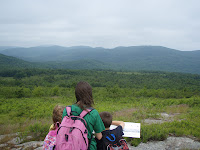 The trail climbs moderately through the forest. Climbing more than I had actually expected but it was still an easy climb. You leave the forest and meander through blueberry bushes with an occasional rock area great for little breaks. Soon we rounded the summit area and are greeted with a pretty awesome summit area. The first thing you find is plaque that has a diagram of the Belknap range in front of you. Next is the blueberries all over the large, domed summit. Then there is the ledgy section that has plenty of flat rock for relaxing.

Oh, and smack-dab in the center is a large boulder. And how could I forget the 180+ degree view!? Although it was overcast today, we could still see the entire Belknap range as well as a good portion of Lake Winnipesaukee! It was spectacular! The weather wasn't bad either. It was rather comfortable with the occasional sunshine through the cloud cover, a nice gentle breeze and no biting bugs around! Ahhhh!

We all found our spots on the rock and sat down to eat our snacks and lunches. After eating we just hung out enjoying this wonderful spot. The kids were finding some ripe blueberries and they began searching for more. This kept them occupied for nearly an hour! A man and his young daughter soon arrived at the summit and his daughter also joined in on the blueberry hunt. Jill and I just relaxed watching Taylor play with the grass and trying to walk around the summit area.

I also did some exploring and found a survey marker, a wood lily, plenty of whorled loose-strife and another survey marker that Adam spotted on top of the boulder. Once the kids were done picking berries we did a couple group photos and packed up our stuff. We picked a few more ticks off us, which were not as bad as I thought considering all the grass up here. We descended down the loop section that swings around the South and West side of the mountain and joins the main trail just above the forest border. It was then a quick hike down and an end to a wonderful, kid-friendly hike!
Posted by Jason at 12:41 AM