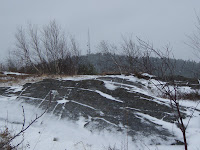 Difficulty: Easy - Moderate:
Fire Wardens trail on South and East side of the mountain is steep and wet with loose footing.
Loop trail which follows part of the access rd. is moderate but easy footing.
Gray Hill or Little Baldy Knob trail is easy with some easy rock scrambles.

Report: With a planned snow storm hike up Blue Job Wednesday I was happy to see the temps. in the mid-40's! I arrived at the empty parking lot at 12:30pm with the snow flying, grabbed my pack and got on the trail. The snow monorail was very hard packed and from the warm temps. thawing it then re-freezing at night it was very slippery. Here and there patches of solid ice were hiding under the dusting of snow. I slipped over 1/2 a dozen times by the end of the trip but catching myself...luckily I have good balance from always being on my feet at work and hiking on the weekends. I arrived at the base of the Little Baldy knoll area and put some extra head gear on as the wind was howling up ahead. I began to wander off trail here checking out the pretty colors of the lichen, birch trees and rock all around. I ventured around to the South side of the knoll (careful to step on snow and rock so as not to damage the delicate blue berry bushes and lichen) and it was on this side that I began to notice signs of fire damage. I am assuming this is how the knoll was stripped of it's tree cover at some time in the past. Charcoal spots on logs, blue berry bushes & bare rock all signs of fire. I continued on past the 6 lonely pine stands  most of which are dead and found a rock "shrine". A partial rock wall & some cairns all on a slab of rock...interesting.
Onward now to the rock wall that leads up to the summit of the knoll I passed a large rock and continued on to the summit. The wind was strong up here blowing the snow around, but the temps. were still warm and I was actually very comfortable. A large amount of pictures already taken by this point I hiked down the trail to the col. and up into the pine forest on the North side of Blue Job Mt. I took notice again to signs of fire damage, most of the pines were multi-trunked which is talked about in Tom Wessels "Granite Landscapes". There is a wonderful mixture of Red, Spruce & Pitch pines. Finally arrived at the fire tower with not really any views to speak of and explored again, finding a trail on the East side of the summit in orange blazes..."so this is where the loop is"! I opted to give this trail a try instead of taking the usual direct route back. This trail curves around the South side of the mountain back to the parking lot. It was 1/4 of the way down this steep trail that I hit a patch of hidden and ice and the trail won this one, as I fell on my butt and slid 6 ft. My water bottle top broke as it hit the ice....argh! More carefully now I slowly made my way down this trail kinda wishing I had taken the other route.

Down back to level ground I suddenly ran into fresh animal tracks in the dusting of snow. A dog perhaps? There were no human prints, what was this animal doing out here alone? A little nervous I took my pack off and got my knife out just in case. It's not the first time I have encountered a viscious dog hiking, but usually the owner is not far behind. I followed these tracks for a ways, eventually passing a small white house and came to the road at a red house with a school bus warming up. Were one of these where the dog came from? The tracks continued on down the trail before dissapearing into the woods. I soon arrived back at the parking lot at a surprising 2:30pm, 2 hours on this mountain! This is usually a 45min./1hr. hike. Guess I was enjoying myself! As I was backing my truck out a big black lab mosied out of the woods. I am not fond of dogs and was just gonna drive off but who can resist a lab?? An what if it was lost? So I called it over and it excitedly ran over. I checked the tag to discover her name was Bella "Blue Job Hiker". This was interesting. I called the number and a man answered. I asked if he had lost a dog named Bella. He replied "you must be at Blue Job", I answered I was, and he said "she's OK, they live at the top of the mountain" (high point of the road I would assume...fits the discription of the two houses mentioned earlier) and he said "she wanders the area and will make her way back home". I said alright, don't recall if I was thanked for calling and not sure I like the idea of an unleashed dog running around a hiking area, but whatever. It wasn't until later on I remembered the first time I hiked Blue Job this past November a man coming down with a dog said "this black dog followed me all the way up the mountain and back, I don't where she came from". Well now I know, she's the Blue Job Hiker!

Pics of this hike HERE
Posted by Jason at 2:42 AM