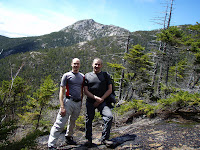 "A Spring Mosaic of Color" (pictures)

Directions: From Rt. 28 and Rt. 16 Junction in Ossipee take Rt. 16 (White Mountain Highway) North for 16 miles. Turn left onto Moulton Drive next to a currently closed gift store (Brown Sign will read "Piper Trail". Continue shortly a few hundred feet and fork right at a private residence to a large parking lot. Parking is $3.00 unless you display a seasonal pass. 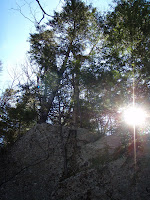 Report: Oh what a picture perfect day! With the last day of April looking really nice we were all psyched up to get up early and get a decent day hike in. Chocorua was the first from Scott's mouth and though I considered others peaks I finally agreed. Conditions were probably still yucky up North and Chocorua and it's Sister peaks and ledges never disappoint us. We arrived at the parking lot already piling up with 8 or so cars! Sky's were mostly sunny and temps already at a comfortable 60 degrees! 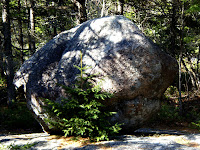 We began our hike at 8:30am on Piper Trail. Like always it felt great to be out in the fresh air amidst the forest! But today felt all the better. We were excited for the upcoming hiking season and all the White Mountains of NH has in hold for us! Better yet not a single black fly was to be seen!! We noted recently logged woods just across the small stream that runs along the trail. Further up we took a break after the long climb up the sandy banking/ridge and were passed by an older couple who started out the same time as us. They continued on Piper trail as most do and we took a right onto the Nickerson Ledge trail. 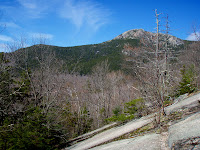 A short steep climb up to the grown in ledge (side trail on right) we passed the small boulder erratics and continued a gradual climb through beautiful pine forests. After making a steep climb up a loose, gravelly banking we began to cross over granite outcrops. Be sure to take a sharp right at the sandy rock slide. Soon ledges will open up ahead and you walk out onto a granite paradise dotted with jack pines. It never ceases to amaze me how quite this area is. So many people pass this trail by, headed for Chocorua's summit. 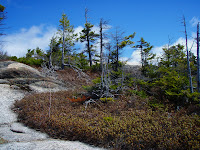 The colors right now are so amazing! A mosaic of color. Shades of grey, blue, white, tan and black in the ledges. Green, yellow, grey and brown of the pine trees. Light and dark red of new Spring growth on hardwoods and the shrub outcrops. The blue sky dotted, scraped and muddled with white clouds. The many greens, blues, greys and  reds of the thousands of lichen and moss dotting the granite and tree bark. White and shiny blotches of snow and ice in the granite crevices on Chocorua's impressive granite spire jutting up from the valley below it. Such a beautiful sight to behold! 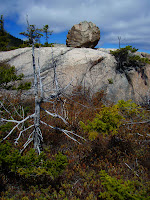 After a welcomed lunch break to eat and take in the majestic wonder before us we returned to our ascent. After passing a whitish, almost circular rock erratic to the right (which I call Carter Rock) the trail descends slightly to a small col. Here the water from melting snow gathered to a large, deep pond taking over a large section of trail. We bushwacked around fairly easily then began the most difficult part of the trip. Here you begin several rock scrambles some of which require walking along steep sided ledges and climbing over granite ledges. I always forget just how tough this trail is. But very exciting and beautiful and well worth the effort if you can handle such conditions. Snow was still deep along the base of the ledges and along certain cool/wet areas, but nothing all that difficult to manage through. 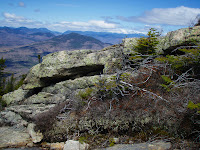 Once over these ledges the trail snakes through granite and pines and slowly climbs up to the Middle Sister peak. Glimpses of snow speckled Mt. Washington were seen with occasional breaks in the clouds that surrounded NH's highest peak. We arrived at the former Fire Tower at 12:18pm. It was a bit windy and cool here so after some pictures we continued around the corner to a sheltered ledge and sat to have lunch. Chocorua jutted up to our left, the Sandwich range beyond to the West and the many peaks and ridges sprawled out to the North up to Mt. Washington. Such a perfect day! 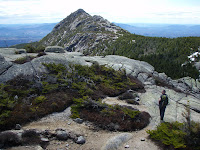 Although I didn't want to leave this spot it was time to make our descent. We followed the trail across more ledge down to another col. then back up to the 1st Sister peak, then back down to another col. where we took a left onto Piper Trail. We passed several other hikers along this area as usual. We didn't bother with a Chocorua summit today. Our biggest hike in a while we felt it best to avoid the crowded summit and take our time going down. Besides, as I have said before, the view from Middle Sister is almost as good as Chocorua and the ledges on Carter and Piper trails are far more picturesque. 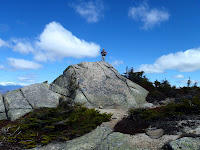 We slowly made our climb down various ledges and snow/ice spots with views of Chocorua slowly diminishing the lower we dropped. Once back in the trees our pace picked up and we made good time making it down the always pleasurable Piper trail.We reached the parking lot around 3:30pm. A wonderful, well spent 7 hours on one of NH's most beautiful mountains! Not one single black fly bothered us!! Temps held steady in the low 60's and winds stayed light to moderate. We moved about half-a-dozen or so blow downs off the trail, a couple remain that need to be axed/sawed. Love, love, love this loop hike!