"Fogged in on the Moose!" (pictures)

Directions: From I93 in Lincoln, NH take exit 32. Head West on Rt. 112 continuing straight through intersection for Lost River. After passing lost river at about 6.3 miles the trail head will be on your left on a corner. Signs are present. 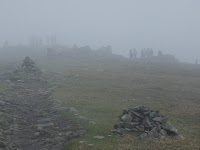 Report: With the long Holiday weekend upon us and Saturday looking like it would be a nice day we set our sights on a 4000 footer. I had some peaks in mind and when Scott said "how about Moosilauke?" I quickly agreed! Our last and first summit of 'The Moose' was when we did Beaver Brook Trail in September of 2007, our first year hiking together. And we were anxious to hike this beautiful, steep and rugged part of the Appalachian Trail again! As we arrived in Lincoln the clouds were still hanging onto the peaks and valley's but it looked like it would lift and break by noon. 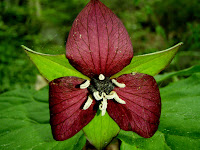 We parked in an already 1/2 full parking lot, some overnighters no doubt and some day hikers. We started out at 8:30am. The trail along this portion was full of Hobblebush, Bluebead Lily's, Sissile Bellwort, Rose Twisted-stalk and mostly spent Trillium. We signed in at the warning sign reading "This trail is extremely tough. If you lack experience please use another trail. Take special care at the cascades to avoid tragic results." Those types of signs always excite me! 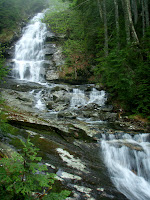 Soon we arrived at Beaver Brook and the 3/4 miles start of nearly continuous cascades! The trail follows the river over steep ledges fitted with steps and re-bar for pulling yourself up. You climb up wet, slippery, broken rock and along side the steep and dangerous brook banking where a slip could be your doom! I could not imagine the campers and through-hikers carrying heavy packs down this trail! It must be so tough! 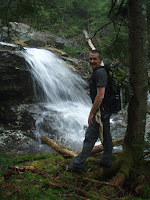 Still climbing up the steep trail there is plenty of moss and lichen that add to the beauty of this trail. I found some crustose lichen flowering which is not something I had ever seen before. We found a few mushrooms also. Cascades continued, the waters were flowing nicely and it was such a beautiful day. It was getting warm and muggy and it was rather a relief to not have the sun shining down! We stopped and posed for pictures along this exciting trail and amazing world of falling water. 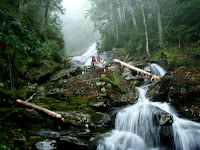 It's one of those areas you could spend all day in taking pictures and taking in the scenery. But just a reminder, extreme caution should be used on this trails and along the bankings which are steep and dangerous. One simple slip and you could be falling down a steep cascade of jagged rock and fast moving water to your death! 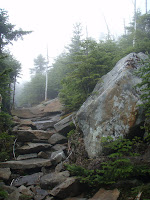 Finally we veered away from the brook and passed the trail for the cabin. We started to see people now climbing past us from the cabin and a few descending back to the cabin. Soon we arrived at the Asquam Ridge Trail junction where we straightened out the sign post by wedging in some rocks. From here the trail began to climb rock as it curved around Mt. Blue. There were view spots here and there but the fog was still so thick you could not see beyond a few pine trees. 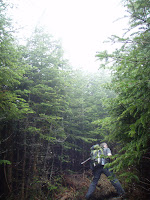 After climbing for a bit the trail leveled off at a muddy section of trail then began to descend gradually along a ridge. I remembered following a ridge for a short way but did not remember descending and especially not this much. Soon I told Scott it just didn't feel right and I think we missed a trail junction or something. It didn't help that I forgot my map and that I couldn't see anything to get my bearings and it was driving me nuts! Scott reassured me that we were most likely on the trail, that I probably just didn't remember this section. And the fact that people we passed earlier were mentioning the fogged in summit. So this had to be the right way! 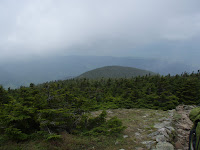 Continuing along the muddy ridge we finally got a quick glimpse of Moosilauke's summit cone. YAY! The trail began to climb again and once passing through some washed out sections of trail we passed the Benton trail junction and began to pass people coming down who looked wet and wind blown! A couple hikers told us it was very windy up there. We finally broke tree line at 12:30pm and were greeted with a misty wind blowing at a steady 40mph. It was a mild wind and a welcomed refreshment from the muggy lower portions of the mountain. The sky would light up a little now and then, and a tiny patch of blue/clear sky would open briefly giving a short range view. And like a hiker said, "oh look a view, and poof, there it goes!" 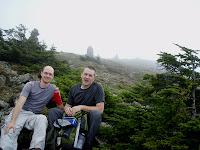 Ah well, as 1HappyHiker commented, sometimes the foggy conditions are just as exciting and interesting! And no one was really complaining, most were enjoying the moment. Not even a group of three from Rhode Island and North Carolina where too bothered by no view. They enjoyed the hike up Beaver Brook so much and rather enjoyed the wind and fog! As we approached the true summit, figures began to appear and as usual the summit area was crowded with a dozen or so hikers. Already having this peak we decided to turn back around a have lunch at the tree line where the wind was lighter. 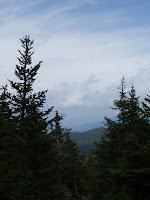 Sitting there for this short time was so nice. Such a calming atmosphere and no pesky bugs to swish away. Actually there had been no bugs at all, all day! That always makes for a great hike! Once we had our fill we headed back down. We met the group of three again along the shoulder of Mt. Blue and we chatted for a bit. They were a very friendly group! We parted ways and made our usual quick descent, slowing as we began the steep and wet hike down along the brook. Below the cabin we began to pass hikers headed up to the cabin. And now the views began to open up a little better! 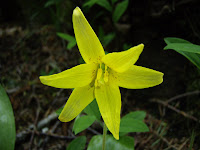 Along the trail we spotted a couple Northern/Red Spotted Newts which I moved off trail. Back below the cascades and on level ground, ahhhh, we took notice of the wildflowers again and noticed yellow flowers had since come out which were Trout Lily's. So many neat little wildflowers in this moist woods! We finally dragged our weak and tired legs across the last foot bridge and up to the parking lot, finishing at 3:30pm.
Posted by Jason at 12:28 AM