Directions: From Alton, NH take Rt. 11 West and follow it for about 6 miles. Trail head parking lot is on the left (blue sign) 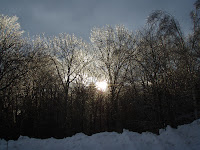 Report: Once again Scott and I didn't make it to the White Mountains :'( The forecast was for bitter temperatures and a breeze, and with some things do to at home we decided to stay close by yet again. Well it turned out to still be a great day and wonderful weather! We decided on Mt. Major and figured we'd attempt to tramp some new trails. And of course I had to tell the mountain "HI" for my parents who moved to Georgia this past fall and whom are really missing "their" mountain! 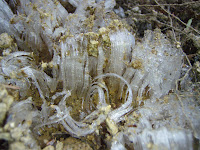 We arrived at the relatively quite parking lot, maybe 8 vehicles including the red van of never-miss-a-day-on-major Art! We began at 9:30am and I decided to take the Boulder trail on the Left side of the parking lot (orange blaze). I had come down this way two or three times with my mom in the winter and was curious as to how it was on dry ground. We made our way past some boulders and stopping to put our necks and heavier hats on. The ground here-and-there was thin curly ice crystals topped with dry mud. Following the logging road we soon came to a trail off the right side. This is what I remember coming down but the blazes continued down the road. I was confused at first but realized that what I thought was the boulder trail is apparently one of the many unmarked trails on this peak. 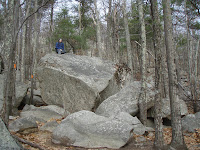 Continuing on up a hill and through birch and beach tree glades then into a red pine glade. I love red pines!! Then we saw why this trail is called boulder trail! A huge boulder field lay ahead of us. No matter how many boulder fields I've been at it's always very cool. Midway up we began to noticed charred trees and brush. Apparently this was the area where the last forest fire occurred this past summer. Views began to peak through the trees of Alton Bay and Lake Winnipesaukee. The trail became steeper as it climbed up to and around a large ledge. 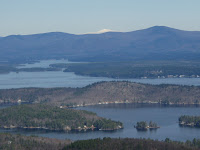 On top of the ledge views open up even more and a wonderful half mile hike up this East ridge to the summit of Mt. Major. This side of the mountain was spectacular and I can't believe after 20 or so years of hiking here I had never ventured off the main trail! Ice now appeared on the trail and ledges here-and-there. The summit reached (1786') at 11:00am we were greeted by Mt. Washington glowing almost an orange color as the sun shined off it's white peak across the lake. The summit area was quite and empty, visibility was excellent! I pulled my phone out and sent a pic to my mother. The cold set in quick upon stopping so a short breather here then off to find the Quarry trail. 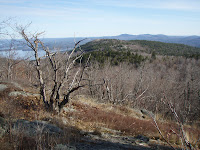 Down the red/blue blazed trail to the Quarry Spur junction, which we took. New territory for us now! The trail drops down to a col. through a logged area. Then climbs up to a ledgy area of Straightback North summit. We banged a right now on Quarry Trail up to the peaks wooded summit (1910'). We continued down the other side to nab some photo's of Gunstock with it's snow guns blasting white stuff on the mountain. The trail soon drops steeply and it was decided we'd head back towards Straightback instead. Once back to the North summit ledge views of Mt. Major were wonderful and unique from here. A very worthwhile side trip! 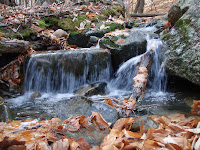 Down this small ridge to the ledges below Straightback we stopped here to relax a bit and have a lunch break at 12:30pm. The sun was glimmering off the lakes or ponds to our East. Once done with lunch we packed up and headed up over Straightback's summit (1880') and back down to the Brook Trail (yellow blaze). We followed this trail down, well, Scott did. Once we got to visibility of the brook I took off down the banking and through the woods to snap photo's! Back on the Mt. Major trail (blue blaze) we began to pass many people headed up. We finished our figure 8 loop at 2:00pm. Total mileage about 5.5 miles.
Posted by Jason at 1:06 AM