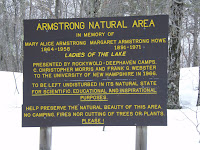 Our hike up Mt. Major with Laurie, Russ and Marcus cancelled last weekend due to rain, we met for lunch in Concord instead. Before heading our separate ways we decided to try again the following weekend and set our sights on Mt. Cardigan. Friday came along and the weather was looking bad again, rain! Sure enough Laurie saw the same and we decided to scrap the hike again. Bummed out I kept an open mind for Saturday and Scott too thought we should try for something and see how the weather turns out. I had the feeling we would have a half decent day if we stayed away from the North Country. 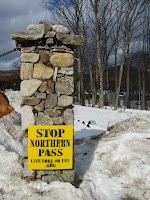 Along came the morning, cool, sunny and dry! I headed North through Meredith for Squam Lake. I had been wanting to try something along the Northern fringe of Squam Lake for some time now. Percival was the destination, the Rattlesnake's in the back of my mind as a back up. As we came closer to Rt. 113 I began to notice signs for "No Northern Passage, LiveFreeOrFry.org". It was rather humorous, on the other side of the lake are signs for "Free Ward Bird". Us Northern'ers don't mess around! And for the record, I say NO to the Northern Passage! Clouds were thicker the further North we went but I kept my hopes up that they would break! We past the Rattlesnake/Morgan parking lots and found the Percival lot not plowed in the winter. So back to the Morgan parking lot we went. One other car was in the parking lot. 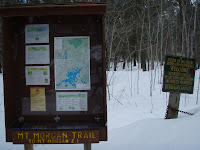 We began our hike at 9:13am on the Mt. Morgan Trail. We did not bring our snow shoes or winter jackets, why? Well, we weren't looking to get all that into a big hike today and frankly we are ready for Spring! The trail was well packed but getting a little soft in places. The wind was blowing a cold breeze at us and by the time we reached the Morse trail to cut over to Mt. Percival trail I wasn't feeling good about this hike. Based on conditions and our lack of winter jackets there was a slim chance of us getting all that far on a 2200 foot mountain! 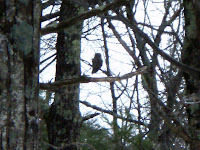 So I made the decision to head back and across the street to do the Rattlesnakes. This was OK as I have been wanting to check these out anyway. The Old Bridle Path trail for the West peak almost immediately begins to climb moderately. We were slow for much of the climb. Neither of us were feeling very energetic today. So we just took our time and enjoyed the cool fresh air. As the trail leveled off we got a little more energy about us. Just then an owl swooped across the trail and landed in the trees ahead. An owl sighting is rare and always exciting! I was able to spot him through the trees and was excited that I could get a picture of him watching us. No sooner did I get the pic, he took off out of sight. 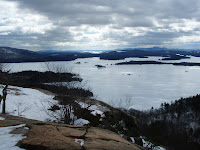 We now began to see wooded ledges to our right and then a spur trail breaks right to a small ledge. The sun was beginning to break through the clouds lending a warming touch to the brisk air. Soon there after the main trail comes out onto a fabulous ledge. All I could say was WOW! The spectacular 180 degree view wraps around from Red Hill to the left, across Squam & Winnipesaukee Lakes and their surrounding mountains and part of the Squam Range. The time was 10am. We took a bunch of pics here and on the rock outcrops. There is also a survey marker here too. The cold wind chilling us down I talked Scott into heading to the East peak. 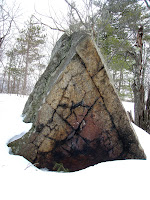 There is a large sign here at the ledge marked as the Armstrong Natural Area. Past this, now on the Ridge trail you pass a very interesting rock formation on the left. It is triangular shaped and sliced perfectly leaving a cross section of puzzle like cracked stone in the center. As you traverse the small ridge you cross at or near the West summit peak (1260'). Then you descend down to a col. and climb again to another ledge. This ledge smaller and a more limited view looks directly over to the massive presence of Fire Tower topped Redhill and it's long ridge marked on it's North end by Eagle Cliff. You can also see the even more massive Northern section of the Shaw/Ossippee Range beyond Redhill's ridge. We then made the short walk up to the summit of East peak (1289') for about 10:45am. 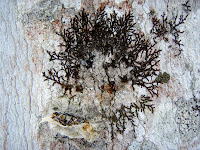 Back at the ledge for a quick bite then it was back down to the col. and back up to the West peak ledge. As we climbed back up I couldn't help but notice the immense growth of lichen on the trees. I first noticed this on a few trees which had a white bark that was crackled and had reddish splotches. I don't recall seeing this type of tree before. The lichen and moss were growing all over these and other trees clinging to the small cracks in the bark. I began to think about just how many enemies tree's have going against them! Lichen, moss, wind, ice, wood peckers, termites, erosion, fire, humans and that's just the obvious ones! And yet they survive! 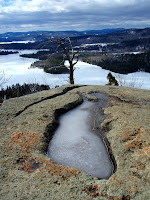 One more stop at the ledge, then we began the climb down. We passed a family of four heading up and nearer the bottom passed two sister's whom we had a pleasant conversation with. It sounded as though they were beginners to hiking. They mentioned doing Mt. Willey via. "the ladders" and said it killed them but was in awe at the summit ledge and with the Gray Jays greeting them! Having just done this hike this past summer we new all too well the difficulty of that trail and the beauty at the summit ledge. They had snow shoes on order and were hiking the Rattlesnakes regularly to get in shape for some more 4k hiking in the summer.

We quickly reached the parking lot from here to find this lot half full and the Morgan lot full! There were 5 Rhode Island plates and a Texas plate. Odd, perhaps all visiting the area together?? We finished this wonderful hike around 12:00pm. Highly recommended, a great short family hike! 3.4 miles for the day, 1000 feet elevation gain.
Posted by Jason at 1:47 AM