"A Peach of a Thanksgiving Part 2: Georgian Granite" (pictures) 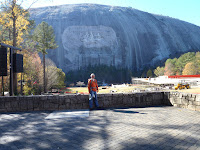 Day three of our vacation in Georgia was Stone Mountain. This granite batholith sitting out by itself was visible to us from the Kennesaw mountains. The mountain is 825 feet tall and covers 583 acres. The top of the mountain is 1,683 feet above sea level. It is mostly open granite from top to bottom. If that weren't enough there is a huge carving on one side of the mountain. According to the brochure it is the largest high relief carving in the world! The Memorial Carving depicts three Confederate heroes of the Civil War: Confederate President Jefferson Davis, General Robert E. Lee and Lt. General Thomas "Stonewall" Jackson. The entire carved surface of the Memorial Carving measures three acres, larger than a football field. The carving of the three men towers 400 feet above the ground, measures 90 by 190 feet, and is recessed 42 feet into the mountain. The deepest point of the carving is at Lee's elbow, which is 12 feet to the mountain's surface. The brochure also boasts that it is the largest exposed granite mountain in the world. Funny, the last thing I thought I would see leaving the granite state of NH for Georgia would be granite, but here it is nearly in Florida! 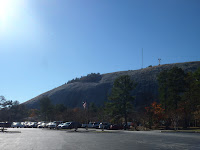 We payed the hefty $10.00 gate fee and in the process of trying to find the parking lot for the main trail called the Walk-up trail we wound up driving around the entire mountain! Which was fine because we got a glimpse of the other features that make this park unique. The only problem was my truck was running on empty and I needed to just park somewhere so I would have enough gas to get back out to a gas station! We finally parked at 11:30am at the Skyline parking lot and got our packs on. The wind was whipping a good cool breeze so we had our sweatshirts on quick! At least the sun was shining bright. Not good for picture taking as it was shining directly over the top of the mountain, but it was nice for hiking! 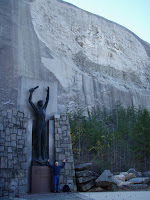 Off to the skyline entrance we hit the bathrooms. The gondola was closed due to high winds which was way to funny! I felt like I was at Mt. Washington or something. Well, I guess that would mean less of a crowd at the top!! We headed down the walk way by a snow attraction being built and ahead of us towering above a small pond was the magnificent carving. Unfortunately I couldn't find any information on the carving at all. Not on the brochure, not on any walk way signs or even on the website! I did find the specs in the FAQ section, but no info. as to who built it and when. After some detours due to the construction going on we found the Cherokee Trail which would bring us up to meet the Walk-up Trail. 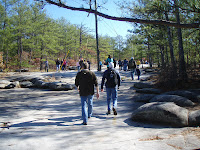 We made our way through the trail in it's final autumn days until reaching the first granite ledge area. Passing all but a couple people thus far, it looked like a nice quite day on the mountain. Then, "Holy Crap"!! We arrived at the Walk-up Trail which I quickly dubbed the free-way! It looked like our NH Mt. Lafayette or Mt. Washington in mid-summer, but worse. A granite trail 40-60 feet wide was side-to-side people! We joined the stampede heading up the mountain. Carvings of graffiti where all over the rock surface, but hey, better looking than spray paint! Another interesting part of the trail are the two telephone poles decorated with gum by passer-by's. It smelled oh-so-good, LOL! It was here that the maintenance access road crosses the trail. A Ford Police vehicle was driving up the road headed for, I guess, the summit. Up further past a roofed pick nick area the view began to open up around us. To the left of the Walk-up Trail was a plaque which read Old Indian Trail. We went this way away from the crowd and checked out the fenced in edge of the mountain, looking down to the park below. 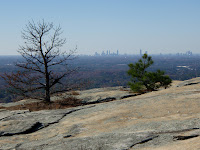 Up past some boulders and a steep climb up to the crown of the mountain. Here the Police truck was coming back down. We were all in awe! This truck climbs and descends this part of the mountain at a very steep pitch. It was scary to watch! We crested the crown and arrived at the summit at 1:00pm. Views were flat in all directions with a couple lonely hills popping here-and-there in the distance including the Kennesaw mountains we hiked two days earlier. The main view up here was of Atlanta City and a whole lot of granite! The summit/Gondola building was impressive, certainly not as unique as Mt. Washington. After we explored the summit area we went in the building to use the restrooms and read the many interpretive signs. 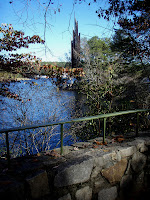 Warmed up a bit we headed back out and circled the crown of the mountain around the building and along the fence. On the less windy side we had a snack and enjoyed the moment. Heading back down was quick. Instead of taking the rest of the Cherokee loop which was about 5 miles we went back the way we came and back to the truck. We dropped our bags, went back over to the cafe at the gondola and had a coffee and a pretzel, mmmm! From here we walked to the Carillon bells which was "originally erected as part of the Coca-cola Company's exhibit at the New York World's Fair of 1964-1965. It was presented to the State of Georgia by Coca-cola as a symbol of friendship and as an instrument for the enjoyment and edification of all visitors to the Stone Mountain Park (1965)" The 732 bell tower was being run on the main land by two people in an enclosed amphitheater type complex. The trail walks out to the small island right up to, and below the bells. They were playing "How Great Thou Art" and it sounded lovely. We took a rest along the lake then headed back for the next stop. 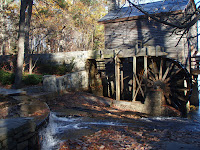 Down a ways down the road and back on the Cherokee trail the next stop was the Grist Mill. A small building with a canal that fed a water wheel. This was another pretty area. Landscaped with stone walls and various plants. There was no information on this spot but I believe it was used during the early quarry days of the mountain. That brings us to our final stop. Just a bit further up the road was the Granite Quarry Open-air Exhibit. I have never seen such an exhibit. It was pretty incredible. A brochure gives the history of the quarry. Signs show every state the granite went to and what was built! The closest to NH was Rhode 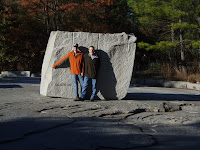 Island where the Columbia Veterans Facility and the Post office in Walterboro was built with Stone Mountains granite. The quarrying of this mountain began around 1845 and went into the 1970's. The history of this quarry is simply amazing. From Civil War monuments and gravestones to use in the rebuilding of the Southern Cities after the war, and used to build federal and residential buildings across the country. In the middle of the exhibit was a 66,000 lb. granite block!

This concluded our day. The was more to see here such as the covered bridge, the garden trails and the plantation. But we were getting hungry and needed to make the trip back to Marietta. This really was a very interesting area. So much history surrounding a beautiful mountain. Hope to visit Georgia again and continue to explore Stone Mountain, the Kennesaw National Battlefield and the Civil War cemetery's. You can view my pics from Historic Marietta Square and two Civil War cemetery's we visited (Marietta Confederate Cemetery and Marietta National Military Cemetery) here > (pictures)