"MUDing and PUDing, a Kenduskeag Scalping!" 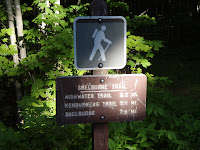 We parked at the Wild River campground ready for another long Saturday hike. Shelburne-Moriah and Moriah Mountains were the objectives today and the crisp, dry air were just what we had hoped for! We left the parking lot at 8:00am and walked back down the road to take Shelburne trail from it's start. Though the water level was relatively low the crossing proved difficult. We had to go upstream a ways to find a good crossing. Once across, a dried up river bed tempted me to take that to High Water trail that follows the river. We came to a stream instead of a trail. So I pulled out my map and found that the trail is actually further away from the Wild River in this area than I had thought. First of two mistakes made and not wanting to take a chance on following the stream and not finding the trail, we back tracked back to and down the Wild River to the Kenduskeag trail and began our long journey. 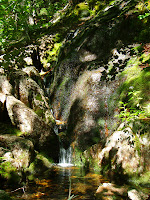 We crossed several dry river beds and flowing streams, climbed a banking and passed the High Water trail junctions. From here the trail is rather boring. Mushroom hunting helped to pass the time. The trail is very gradual and overgrown in many sections. I stopped to clear a blowdown about a mile in. Otherwise, the blowdowns were taken care of, just some shrub growth beginning to take over the little used trail. Once you reach the brook crossing (approximately 1700ft.), the trail climbs steeply. Along our steep climb we could here some birds chirping. I was startled when I heard Scott ahead let out a scared yelp. I looked up in time to see a goss hawk nearly a foot away from scalping Scott. His yell scared it back and it flew around me and onto a branch 15 ft. away. It glared at us then flew off out of sight. Apparently that chirping was a nearby nest! We cautiously made our way out of that area, not waiting for it to come back out of the trees for another attack! 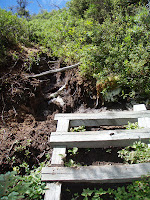 Neary 4 miles and 1700 feet of elevation behind us we finally arrived at the Kenduskeag trail. The steep climb continued before leveling off under some ledges then a ledge on the left that we could climb to get our first views of the day. Shelburne-Moriah Mt. rose steeply ahead of us. Moriah could be seen as well as most of the Carter's and the Baldface's. We returned to the trail, dropped slightly then climbed through brush and a bad washout at a ladder and up to an open knob with more views. A board walk started here which helped through the muddy sections. Down another col. than another steep climb up Shelburne Mt. We climbed out of the tree's to an open plateau, then back into trees and onto boardwalks and mud to the Western, more open side of the mountain and it's highest point. 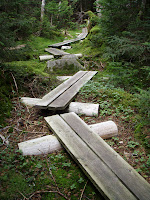 We reached Shelburn-Moriah's summit 3735' at 12:15pm. Picture taken we hit the trail again, the semi-open ridge and Mt. Moriah ahead of us, with the Northern Presidentials now looming behind Moriah. We climbed down the summit to the ridge and found a spot with a little less wind. Temps. were only in the mid-50's and the wind hitting our sweaty bodies was a bit cold when not moving. Lunch quickly eaten we continued on our journey. Kenduskeag is the Abenaki word meaning 'pleasant walk', but it was anything but. The views from the Western side were nice. Particularly the unique view across to the Baldfaces, the granite bald shoulder of South peak shining in the sun. And the view of Moriah from this direction interesting, especially of the granite slide on Moriah's North East facing slope. And I never seen such an extensive sections of boardwalks. They must be over a mile in total length! 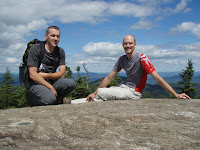 From here pretty much the same story the rest of the way to Moriah's summit. PUDS, Mud, boardwalks, back into trees and then steep, steep, steep. Once passed the Rattle River trail we began to see people as I had predicted. One impartcular gave us a good laugh. Scott stopped because he had heard a noise. A small dog came around the corner and began yipping. The owner yelled "shut up Jake!". He stated the dog owners usual words "he's OK" to us, then picked it by the handle of the dogs pack and carried him by us. It was rather humorous. We had just about ran out of energy when we finally made it to the summit sign and reached the surprisingly empty summit 4049' at 2:15pm. We snapped some pics, had a snack and took back off, many more miles to go and the day getting late. 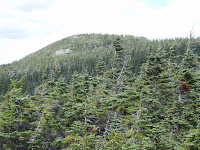 It was at this time I made mistake number 2 of the day. When coming down off the summit, I took a left at the carter-moriah trail sign. We dropped nearly 200 feet before I had a feeling that something wasn't right. We should not have dropped this quickly and there were no open ledges I remember from our hike in 2007. And I was certain the trail we took up our last Moriah hike over Mt. Surprise was Carter-Moriah trail. So I once again took the map out, and lo and behold we were headed the wrong way, rrrrr! We angrily trudged back up the steep trail, passing those we saw going up, who looked at us confused. Wiped out now, we arrived back to the summit sign. As we passed it a hiker said, "aren't you going to the summit? It's that way!" We said we were already there but went down the wrong way. He laughed and said "that happens", he himself had gone right by the summit sign and that is why he was making sure to point it out to us. 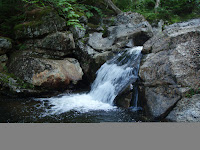 We climbed down the steep section back to the kenduskeag junction and continued on the Carter-Moriah trail. Passed by many other people, again expected on this portion of the mountain, and as we arrived at the ledges we looked back at the now visible summit full of people. The rest of the trip went well. 5 long miles of Moriah Brook trail, but this trail is always a pleasure. Easy, soft footing most of the way and a beautiful, cascading Moriah brook. The water was low so the cascades along the way weren't much and since it was getting late in the day I didn't make many stops or side trips for pictures. We hussled down, making our way to the gorge and the PUD section of trail up and down small run-off stream gully's. Finally over the bridge and a final climb up a banking. We reached home plate at 6:00pm.