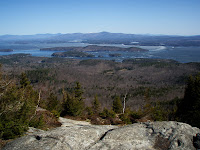 Directions: From Alton, NH take Rt. 11 West and follow it for about 6 miles. Trail head parking lot is on the left (blue sign)

Report: It was planned early in the week to meet up with a fellow photographer for a Friday Mt. Major hike. We had previously hiked Stonehouse Pond and Jeff had not been up Major before. We hit the trail at 8:30am up the Mt. Major Trail. It was cool but otherwise nice. The trail on it's upper sections and especially just below the ledges was still holding patches of packed snow and ice. Spring is making a slow go in NH this year, that's for sure! 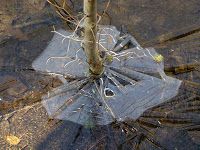 After passing Art (a Major regular) we reached the summit and took some pics and a small snack break. Moosilauke and Washington was in white and the other various peaks visible. The lake was still in the process of thawing. The view from here is always so incredible! Soon we were headed down via the boulder trail. The steep decent down the ledgy area was slow going then it was an easy hike out the rest of the way.
Posted by Jason at 12:03 AM