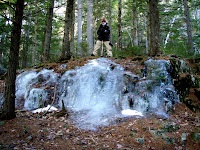 A little bit of everything today. I talked to my brother (Jeremy) the night before who was possibly going to join us Sunday. In the morning he texted me saying he was coming but running late. When he showed up we took off for North Conway. My brother hadn't brought a sandwich and wanted to grab one from a store on the way. I stopped at the Subway in Ossipee, not yet open. Tried the store in the same lot, nothing. Then stopped at the Log built gas station down the road whose sandwich fridge was broken. 3 strikes your out! Chocorua was partially in the clouds as we passed by, looking cold and snowy. I made one final stop at the Circle K in Conway for gas where Jeremy finally got his Sandwich from Amato's. The Mountains that circled Conway were all visible looking pretty good. Temperatures and wind wasn't too bad as we arrived at the Hurricane Mt. Road and parked. The sun was shining through partly cloudy sky's. 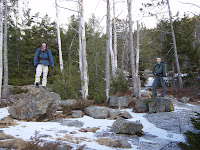 We began the hike at 9am. The forest was void of any snow so we left my snow shoes behind. The trail began with some minor ice then remained frozen dirt with occasional patches of ice. Once we huffed and puffed up the moderate climb we arrived at the ledges. Ice began to increase but there was still too much rock for micro-spikes. So we carefully made our way over slippery ice and rock hopping. We passed two guys coming down who questioned our not having spikes. We told them we had them with us. Turns out we would need them! 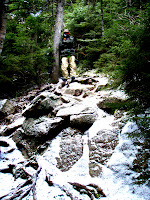 The view of the day yielded Whitehorse ledge and clouds of snow squalls now covering the Moats and the Mt. Washington Valley. It looked brutal. After Jeremy and I played around on some ice hills Scott and I finally decided it was time for the spikes. Jeremy didn't have any and so would have to suffer it out. With all the energy he has however it didn't slow him down the least bit! 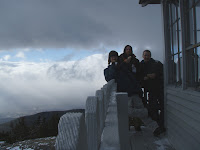 Above the ledges the trail swung around the mountain then made a steep climb before leaving the pines and into the partially open summit. We passed a man just before this coming down with an orange hat. He mentioned we were close and was dissapointed there wasn't a log book in the tower this time. Winds were stronger here but still didn't seem bad. Despite the ice we made book time and arrived at the summit of Kearsarge North (3268') at 12pm. We headed for the enclosed fire tower and chowed down on some much needed food! The wind was whipping around the frozen windows of ice crystals. Views extended to, well, the doubleheads and Black Mountain Ski area and that's it to the North! Cranmore and the Green Hill Preserve and that's it to the South. Ah well! 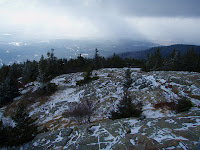 It did look like blizzard central North and West of Conway. We were possibly the only 3000' + mountain in the clear all day! At least from this perspective! At least we were warm! Just as we were finishing up an older couple joined us. After some small talk we packed up and went back out into the cold. We froze in seconds. The temperatures seemed to have dropped, the wind picked up and it was snowing! We climbed over the rocks and threw our spikes back on. 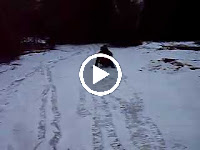 We then spent the first half of the hike carefully negotiating the ice and assisting Jeremy when needed as he slid, swung and jumped his way down the trail! Once back down to the ice hills Jeremy got his last slides in and soon there after the spikes came off. This turned out to be a mistake of sorts because we now had to re-adjust to not having the traction. And there was still ice in sections. I forgot I didn't have spikes on and hit the ice and went down. Scott went down as did Jeremy. One section Jeremy was complaining about the ice not being slippery in one spot, just as he said this he slipped and went flat out on the ice! I cracked up laughing, lost my footing and went down the ice behind him. It was painful but funny! 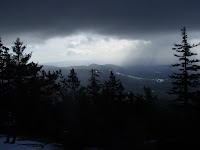 We passed several people coming up as we continued and made our way through sun light and snow squalls. We passed the orange hat guy again on the ledges taking in the blustery view. After loading my report on Newenglandtrailconditions.com I noticed the same report by Waumbek. Perhaps that was him? An interesting hike for sure. Full of laughs. We reached the truck at 2pm. Total time: 5 hrs. Mileage: 6.2 Elevation Gain: 2600'
Posted by Jason at 12:17 AM