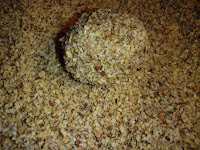 After finishing my work Friday night I stopped by my brothers in Dover to pick up my hiking pole he had accidentally brought home with him from our hike up Kearsarge North. We chatted and talked about our plans for Saturday. He was headed to snow board with his son, I was headed to hike. I got home late at 11:30pm but was still determined to make my Tornado Balls! I popped my Advil PM, something I HAVE to do when going to bed early as I WILL NOT sleep. Working nights my whole life and my biological clock is on hyper mode from 10pm to 3am! I whipped out a double batch in no time, added 2 banana's for good measure and made the tedious effort to roll them all. 30 balls in all by the time I was done! Then, the just as lengthy clean up afterwards! 12:30am was rolling around and I was beginning to feel the woozy affects of the Advil and took my shower and passed out in the fluffy blankets! 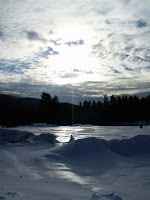 I awoke 6:30am and dragged my sorry ass out of bed. I hate getting up early! Showered, threw on the hiking layers and stumbled down stairs to give Scott that "leave me alone, I'll rise but I won't shine" look. I opened a can of Tuna to make my sandwich and made the mistake of squeezing Ranch dressing into it confusing that bottle with the horse radish sauce bottle. I wasn't too happy! So, opened another can and got the dam sandwich ready! All the other bars and Tornado Balls packed, bags packed and snow shoes ready we packed up the truck and headed out. 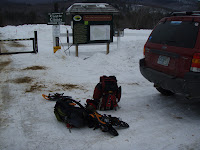 We originally planned on joining Laurie and Russ for a second attempt at Mt. Hale, but I knew we wouldn't make such a long hike (still being new to snow shoe's and Scott not being a very big fan of winter hiking) so I planned for something on the lighter side. I had wanted to get back to the Brook Trail and Bald Knob at Castle in the Clouds for a winter hike, and that would be our goal for the day. We passed by Lake Winnipesaukee, with all it's bays dotted with bob houses, cars, trucks, warming up snow mobiles, four wheelers and people! We quickly made it to the parking area for Castle in the Clouds Conservation Area and parked with the other 2 vehicles. 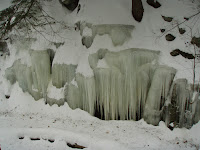 We almost decided not to bother with snow shoes, but not wanting to make that mistake twice I attached mine to my back pack and Scott followed suit. Our start time was 8:30am. It was a short plowed road walk to the trail head for Brook Trail where we said our hello's to two people walking dogs along the road. The trail was not packed down at all. There was one snow shoe trail a week old and that was it! I was rather excited we would be making good use of the snow shoes finally breaking a trail! The deep, ice crusted snow was difficult to walk in. It sounded like a big bowl of Rice Krispy's all day! We soon we met a more packed trail. We arrived at the first of many falls, all of which were snow covered and iced over. We crossed over to an unpacked trail section, then back onto packed and so on. 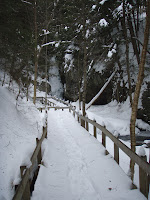 We arrived at the first large fall which unfortunately was also snowed over as was the 40 foot fall at the boardwalk which was a thick column of ice. We adjusted our bunched up socks here and tightened boots and snow shoes etc. A small snack and then it was the steep climb up the banking and up to the connector trail. This is used as a snow mobile trail in the winter. We walked the road down and up to the Bald Knob cutoff trail and began the 1.3 mile climb. We started off slow, but that was fine because it was early and we were just gonna take our time and enjoy ourselves. 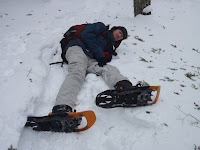 Right off from the first climb I turned to talk to Scott and the backs of my snow shoes sunk in the soft snow. Losing my balance I planned out my fall and exclaimed I was going down! I fell off trail into the crunchy, but otherwise soft snow! Arm dug in and stuck, and the heavy pack holding me down I waited for Scott to snap the picture before I could get him to pull me back up onto the trail. The rest of the trip was pretty uneventful. We passed over the first ledge area with partial views and I broke out the "Balls". After our break and snack I got a burst of energy and got a couple hundred feet ahead of Scott. Once on the Bald Knob trail Scott caught up for the last .3 miles. 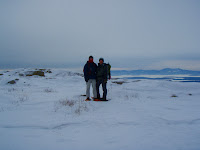 We reached the Bald Knob summit at 11:15am. The wind was blowing steady here making the low 20's feel like the low teens. The view was wonderful. The clouded sky's made pictures better then if the sun was shining which would have caused solar glare off the snow and there was a wonderful glow behind the Belknap range beyond Lake Winnipesaukee. Some quick pics and we were headed back down out of the cold. Scott took the usual lead down and boy did we drop down the trail with haste! There were a few near falls for both of us and Scott nearly pulling his back out on one particular slip. We had some fun following the two ski paths that weaved back and forth on and off the hiking trail. We arrived back at the snow mobile trail. A scary moment of the machines coming just as we got on the sharp corner of the road then onto the Shannon Brook trail for an uphill walk back to the truck. Finishing time was 12:30pm. 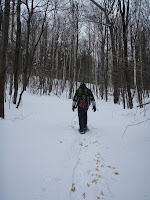 This trip was just enough for us. Plenty of elevation, about 5 miles. Temps ranged in the mid to upper 20's with a wind chill at the knob. A beautiful area that I can't wait to explore over the next year! And I can't wait for a Spring hike on the beautiful brook trail when the water is gushing over those falls!
Posted by Jason at 12:36 AM